All current U-Groove clubs will be non-conforming soon....

And all this because Arnold Palmer is upset that the game is played in a different way these days thanks to the equipment???

No.All this because a 70 yard wedge from deep rough is no harder than a full 7 iron.

30 years ago if you went in that rough in say the US Open,you were fooked,now it doesn't matter.A midget like Corey pavin will never win the US Open again

So why not make the rough and bunkers harder to get out of on the pro tours, rather than change the equipment played by 99% of golfers who *can't* hit those shots to try and make things a bit harder for the 1% of golfers who can?

They have 4" Bermuda as it is! They can still get the ball to stop from it.As for spoiling the game for amateurs,many would disagree,having 'normal' equipment increases the euphoria when you develop your technique and hit back spin

I think I'm just bitter about how these ex-players and administrators keep saying how 'easy' the game has become with new technology.

The last time I slogged around 18 holes I can't remember the word 'easy' coming into any aspect of it...

I think/hope this is a non-issue. On the surface, it would seem the OEM's would benefit dramatically and not 'buck' a u-groove ban. One would think all competitive golfers would need to purchase new clubs (irons/wedges) and the windfall would kick-start a flailing industry I do not see this as the case.

Some of the forged irons are still manufactured with v-grooves. None of the cast irons are v-grooved. The v-groove is virtually impossible to cast and would need to be machined into each clubface. The cost would be prohibitive. This fact is what has initiated the discussion suggesting a "modified" groove design somewhere between the current v and u grooves... something that would be possible to cast. But...

If you purchased new irons/wedges (let's say you got them for Christmas 2007) and the USGA would issue a rule in January 2008 making all current u-grooves non-conforming, can you imagine the upset public? Can you imagine the cost to the OEM's to "trade" the recently purchased sets for the newer conforming clubs? The OEM's will fight this tooth and nail!

Taylor Made had a similar issue develop with the .830 vs .860 USGA COR numbers. It was rumored the USGA would settle on a max COR of .860. Taylor released a number of drivers with the .860 face. Some 60 days later, the USGA came out with the .830 numbers and Taylor traded out any of the .860's for new .830's. The cost was huge... and this was only drivers. Imagine if suddenly ALL irons currently owned would, tomorrow, be deemed non-conforming? How many sets of new irons were purchased nationwide during the past 30 days??? ... the past 90 days??? Where would the cutoff be?

Should the USGA put forth some "interesting" ruling making a large percent of current irons and wedges non-conforming... first, they would need to be prepared to spend significant bucks on the attorneys. Then, if successful in their defense of the decision, there would almost have to be another settlement that would include a grandfathering. One of the posts suggested 2 years. I would really be surprised if this short. It would be difficult to have a cease and desist order relative to this ruling that would require all manufacturers to stope current production. The only way this could be framed would be if the OEM's were party to a civil suit and a judgement in that suit would include such a cease and desist. This could get sticky real quick!!!!

If I had a crystal ball, this is what I believe I would see. The USGA will issue new groove conformance rules in January 2008. Any irons/wedges produced after that date would need to conform to the new guidelines. After a date somewhere in the future... I'd think between 2 and 5 years... only grooves conforming to the new rules could be played, again, in USGA sponsored events. The PGA would have the option... and I would imagine they would act... of ruling that the USGA guidelines would extend to all PGA tour events as of that same date. This would allow a transitioning to the new groove design by professionals over a period of time. It would also allow us weekend hackers to continue playing our club tourneys that are sanctioned by... not sponsored by... the USGA.

Every few years something like this comes up. The last "biggy" was the driver COR/size/length issue. There have been rumors around for years that the long putters will be ruled non-conforming. The ball issue is being "batted" around.

I'm not going to rush out and sell my Eye 2+'s just because it is being rumored the USGA may tell me they don't like the grooves. Let's not jump off tall buildings until we see the ruling. However, this does make for excellent fodder to feed the significant other as a valid reason to purchase new sticks. "Honey, that wicked ol' USGA has ruled my clubs illegal!" "If I get caught playin' them, I might get arrested and there goes your gravy train!" "In order to protect our family's house and home, I am forced to go trade this contraband set of clubs for the new legal version!" "Be prepared to see the Visa max'd out soon!"

Dammit Limp you took the wind out of my sails, I was going to comment on the fact that the only good thing Ping ever did was sue in a case like this, and you went and blabbed it before I could poke more fun at WBL.:laugh:

Davebud said:
Dammit Limp you took the wind out of my sails, I was going to comment on the fact that the only good thing Ping ever did was sue in a case like this, and you went and blabbed it before I could poke more fun at WBL.:laugh:
Click to expand...

And, you see, this rumor is so much different than what happened between Karsten and the PGA. (That's what's scary about this rumor!) After the USGA had been petitioned to make Karsten's grooves non-conforming, their research could/would not do so. The complete issue had to do with an interpretation of the, then existent, groove rules and how one performed the measurement between grooves. Was the measurement to be taken from top or radius to top of radius or from between the vertical planes of two adjacent groove sidewalls. (Sorry, probably lost some on that dizzy explanation.) When the USGA said they would not interpret the measuring protocol as Nicklaus wanted them to interpret it, JN petitioned the PGA. The PGA... not at that time, or since, in the business of deeming confroming vs. non-conforming... ruled Ping's grooves non-conforming and as of that date could no longer be used in PGA events. No other OEM was named. The PGA virtually was putting Karsten out of business since any professional playing his clubs immediately would have to change. The resulting publicity would close his doors. This seemed... and in some of our minds was... a vendetta to eliminate a competitor of MacGregor (of which Nicklaus was a major owner). Karsten had no choice but to seek an injunction against the PGA and the resulting 3-year court battle was on.
In the case of the current rumor, the ruling would not effect a single OEM. The ruling would make many current and past offereings from a bevy of OEM's non-conforming. So, the question lies... Would the OEM's look at this as devastating to business and file similar action? Or, would the OEM's look on this as a windfall and rejoice in their boardrooms?
I would love the opportunity to be a "fly on the wall" of the various OEM's upper management and see just how this rumor is being looked upon.

Played my Wilson X31's from the late 70's until the mid 90's. Then, had a set of Toski Perfect Match (2-PW and yes, I played the 2 iron) made. Played those until this past fall. Bought a set of rac OS2's in November, and just bought a set of MX 23's. Going to "test hit" both and keep the ones I like the best (probably the Mizzy's)...selling the others.

Just had the Toski's reshafted/gripped...they're heading to the beach and I'll keep playing them.

Going to have the Wilson's gripped and re-do the heads so I can play with them once in a while just for the fun of playing an old, forged blade.

This fall was the first time I ever bought wedges other than what came with my set. Now, I've got a brand new rac black TP 60º that I'm going to sell because I just don't need it.

Hang your head in shame! You are a disgrace to this board!!!!!! :laugh: You should be taken out and :huntershot).

Woops! My irons are early 90's vintage. Guess I better be quiet!!!!

limpalong said:
Hang your head in shame! You are a disgrace to this board!!!!!! :laugh: You should be taken out and :huntershot).

If you read the original article in Golf Digest, it says that the differences in spin are only "significant" in full shots from the rough. 50 yard pitches, chips, and all shots from the fairway aren't noticeably affected by grooves. The testing was done with identical wedges except that one wedge had U-grooves, one had V-grooves, and one had no grooves at all. The smooth and the V-groove clubs showed similar performance (spin) from the rough, but the U-groove in some cases actually spun more from the rough than it did from the fairway. That is what they are particularly and justifiably concerned about.

Driver COR won't be as much of a factor if hitting the fairway is more important than hitting 320 yards but ending up in the rough. I think it will be a positive step forward, even if it's a bit of a reversal. I hope that it gets implemented.

Correct,because all grooves have to do is channel away moisture and grit,and U grooves do it better.

Off the fairway,you get just as must spin off a face with no grooves at al,just flat

Sandy said:
I think I'm just bitter about how these ex-players and administrators keep saying how 'easy' the game has become with new technology.

The last time I slogged around 18 holes I can't remember the word 'easy' coming into any aspect of it...
Click to expand...

and you went and blabbed it before I could poke more fun at WBL.:laugh:


Dave, you be nice to me!! I showed this post to Razor and he really started growling!! :laugh: 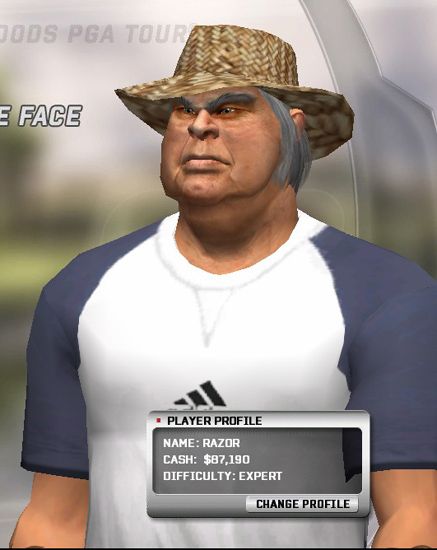 F
The best thing I have read regarding the new V-Groove Rule.
2 3 4