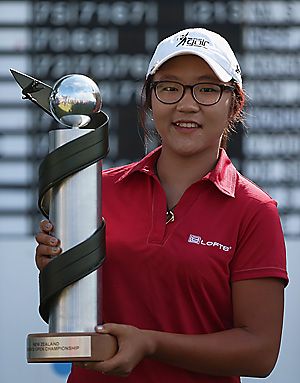 ​
Just 15, Lydia Ko continued to prove herself among the best women golfers in the world with a victory at last week's ISPS Handa New Zealand Women's Open.

The win moved Ko up to 30th in the world and would have been worth $41,000 but, alas, she's still an amateur. With Ko and company heading into this week's LPGA season opener at the ISPS Handa Women's Australian Open, Golf Channel's Randal Mel takes a look at exactly how much she's leaving on the table.

But I'm sure she's adding a nice collection of engraved silver plates. Probably add up to $100 worth.

Are all these news stories automatically fed into the forum?
OP

TEA Time said:
Are all these news stories automatically fed into the forum?
Click to expand...


Correct. Don't worry though, it doesn't up my post count
You must log in or register to reply here.

No Doubt About Lydia Ko

Lydia Ko By the Numbers and U.S. Solheim Cup Team