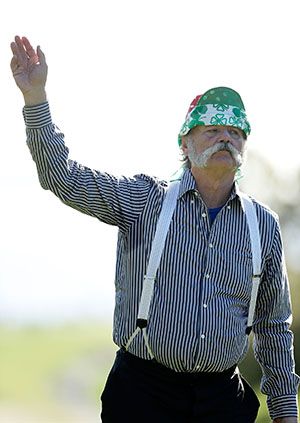 ​
The Monterey County Herald delivers a fun gag-by-gag account of Bill Murray's third round of the AT&T Pebble Beach National Pro-Am, which was a blast for his fans even as Murray and his pro partner, D.A. Points -- who won the pro-am division two years ago -- missed the 54-hole cut.


Though he had no time for the press, Murray gave his rambunctious best to the enormous crowds lining the fairways for a sun-splashed day at the AT&T Pebble Beach National Pro-Am. He limped through his round wearing a red-and-white polka-dotted Smurf hat, a long-sleeved striped shirt, and suspenders holding up a pair of rain pants that accentuated a burgeoning paunch.

At the 15th tee box, home of the rowdy "Club 15" cheering section, Murray seized a giant champagne glass brimming with hundreds of golf tees and emptied it into the gallery.

When somebody handed a football to former San Francisco 49ers offensive tackle Harris Barton, Murray did his best to kick a field goal. The boot hooked radically to the left, but Murray celebrated as if he'd won the Super Bowl.

After draining a short putt on the 15th green, he acknowledged the applauding crowd first by doffing his silly-looking cap ... then by dropping the suspenders off his shoulders ... then by opening his shirt. Mercifully, the striptease ended there.

Still the tournament's top attraction, Murray opted to walk toward every shot along the rope barriers, signing autographs, posing for photos, tickling babies and chatting up fans.
​

Source: Bill Murray at his zany best at Pebble Beach despite missed cut
You must log in or register to reply here.

A Brief History of the Crosby Clambake (Pebble Beach Pro-Am)