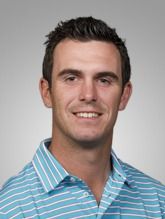 ​
Billy Horschel​
BILLY HORSCHEL CLAIMED HIS FIRST PGA Tour victory on Sunday at the Zurich Classic of New Orleans. Horschel, who has come close this season, broke through by firing a final-round 64, which tied the course record. It included a clutch 27-foot birdie putt at the 72nd hole to beat D.A. Points by a stroke. Kyle Stanley finished solo third.

"I read it right away," Horschel said. "I knew exactly the break on it and everything. ... And I was like, if it's my time, this putt needs to go in."

"This is something that I've wanted since I've turned pro," Horschel said, "and I've always felt I was good enough to win out here. I just felt I had to check every box. Some guys get out here and win right away and then they struggle. Other guys it takes longer for them to get to that process.

"You know, I've had some injuries that hurt me and some other stuff and then I had to deal with my emotions a little bit better, but to finally get the first victory means a lot to me. There are a lot of people ... ever since I started playing golf from a little kid until now there's always been someone who has helped me in some way, whether it be big or small. They mean a lot to me. This win is for them too as well as for myself."

As PGATour.com reported, Horschel was ready to win. The 26-year-old Floridian has made 22 consecutive cuts and finished in the top 10 in his last three tournaments, including a T2 at the Shell Houston Open.

Now Horschel can exhale and let the career milestone sink in. His next start will be the The Players Championship in two weeks.

Source: Billy Horschel Wins Battle of New Orleans
You must log in or register to reply here.

Weary Rory Regrets Not Taking a Week Off

PGA TOUR VIDEO: 61 and 63 on Weekend Earn Jim Herman the Trophy at the Wyndham Championship