So I got to play at this club with a co-worker of mine. We have a guy we're trying to hire in town, so we took him out to the course.

First, the clubhouse is amazing. Tremendous views of Lake Mendota from the bar and the patio where we had lunch. Speaking of lunch, all the food we ordered was delicious. Every single employee I met or interacted with was extremely nice/helpful/welcoming.

Now...for the golf...this is by far the most difficult course I have ever played. Period.

This course is built on possibly the tallest hill in Madison back in 1921. Surrounded by one of the most exclusive and expensive neighborhoods in the area. A fairly short course at only 6200 from the tips and apparently it used to be slightly longer before the clubhouse and patio were expanded shortening a few of the holes. Several par 4's in the 300y range however the par 5's are fairly long with all of them being over 500y. Some fun history of the grounds this course was built on as there are several Native American burial mounds on the property.

Carts: Top notch electric carts with auto downhill braking which is pretty helpful on this course. Built in GPS that was very good and accurate to the range finders we had. They had battery powered 'club caddies' that follow you around the course as well which was the first time I've seen something like that.

Greens: Wide variety here. There are small greens, large greens, 3 tiered greens, fairly flat greens, deep greens, wide greens...no two are alike and most of them are extremely deceiving. Meaning, while walking up to the green, you swear it slopes to the left, but you find out quickly putting on it that it generally slopes the other way. They use the contour of the land very well to confuse you as to which way the ground is sloped. The only thing that doesn't vary with the greens is, they are extremely fast. I don't recall playing on greens this fast ever. Keeping your ball below the hole is essential to scoring well.

Fairways: This is the crazy part about this course. There are several holes here where it's nearly impossible to get a FIR. The fairway in the landing zone is so slopped from left to right or right to left that a ball that's landed anywhere on the fairway runs off into the rough. Even if you dribble it onto the fairway from the high side rough...it will run all the way down. Usually there is a small area you might be able to hold somewhere...but without knowledge of this course, even a fairly skilled golfer is going to have problems. LOTS of elevation change. Several tees that are 25-50 yards above the fairway level. Several holes with approaches that are significant uphill shots into greens that slope slightly away.

Bunkers: Numerous and penalizing. I only found myself in 2 the whole round, but they were not fun. Most are at least waist deep. Not very many fairway bunkers on this course however, mostly greenside. Sand in them is, as expected, very nice and consistent.

Course upkeep: Phenomenal. A few areas of GUR, but they were clearly marked. The rough was better maintained here than some of the fairways on the courses I play on. I'm starting to realize why they call those courses goat tracks. There was no standing water on the course at all. All the tee boxes were very well kept with only the par 3's having any real significant divots. Tee boxes were always wide and deep enough and without any significant slope. Fairways were fantastic. Several of them, the ones with slope, had no divots in them at all...because you simply can't get a ball to stay on them long enough to hit a shot from them.


Overall: Very fun course, but man, this thing kicked my ass. I wasn't striking the ball great to start with, but it's extremely easy to end up in some really bad spots on this course. There were a LOT of punching out from under trees. Every fairway is lined with mature trees and any errant shot is bound to hit wood and end up who knows where. I can only really think of one plain jane dead straight par 4. Almost every single hole was either significant elevation change, significant side slope, dog legged, tight tree canopy, or otherwise difficult in some manner. Generally though, if the hole was extremely long, or had a difficult fairway to deal with, the green was more forgiving. if the hole was short or otherwise easier, the green would be a 3 tiered monster with lots of slope.

I would go back....but hopefully my ball striking is better by then.

No idea...I didn't spend a penny. Company paid for it.

Just checked it out on Google Earth and yeah, there are some decent elevation changes there. The imagery is from 2014 and it looks like they were renovating some of the greens at the time.
Great review, Glark! 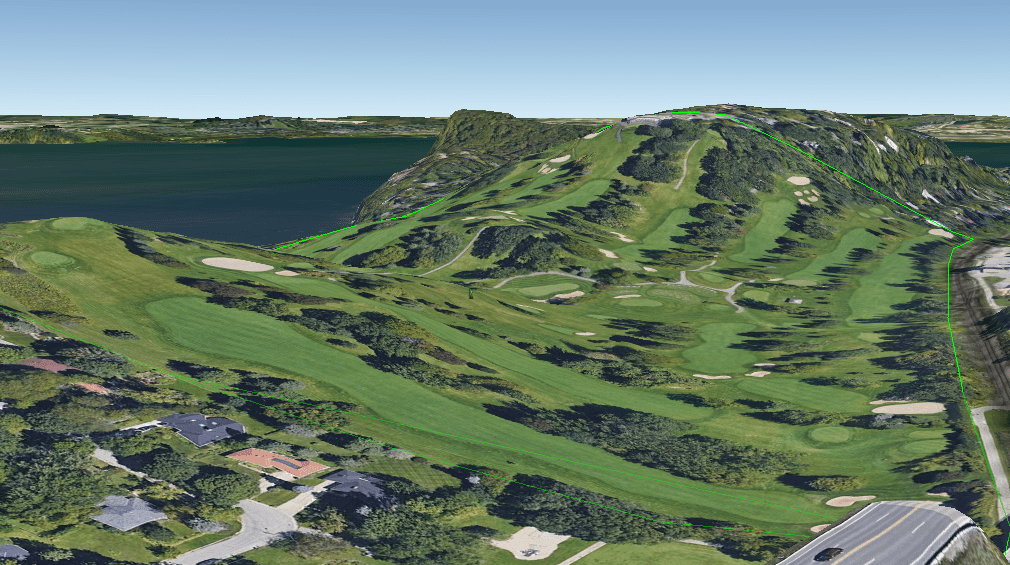 TEA Time said:
Just checked it out on Google Earth and yeah, there are some decent elevation changes there. The imagery is from 2014 and it looks like they were renovating some of the greens at the time.
Great review, Glark!
View attachment 32446
Click to expand...

Wow ! Plus the beer cart lol
You must log in or register to reply here.