Well if you have to ask.....maybe I'll take up fishing :emot-angel:

Knowledge wasn't the best choice of word - appreciation would have been better.

Sorry if the nasty leaderboard didn't throw up all your ickle favourites at the top, I'll write a letter to the R&A immediately expressing your dissatisfaction.

Anyway not to worry, soon be back to target golf and the big names fighting it out. I can't wait to watch all those wedge approaches, it's bedwettingly exciting stuff.

Indeed, Stanters. And I can't wait for the next tournament over here that is postponed because of wind (2007 Verizon Heritage.)

xamilo said:
Then I am a total Golf idiot as well because I found it BORING. I'm sorry I'm not at your knowledge level but I'll do my best to train and read all this year to see if I find fascination next year on a Major decided between Sergio Garcia and Sponge Bob Square Pants
Click to expand...

I watched very little of "The Open". I tried, but every time I turned it on....I fell asleep. I think knowing the score when I woke up every morning made it harder to watch that evening. I do think Darren Clarke is a classy fellow and my hat's off to him.
OP

Ok, I started this after a few celebratory drinks so I'll expand now sober.

Darren Clarke is my generation of golfer. When growing up I played in several tournaments that he played in. He was always head and shoulders better than everyone else. His pro career started out with such promise and he delivered somewhat, but always lacked that something when it came to the Majors. People doubted his ability to see it through. He tasted success, moved away from Ireland to live outside London, enjoyed the trappings that the players in the top echelons of golf get rewarded with.

Then he was hit with tragedy, his beloved wife dying from cancer in 2005. With two young boys to bring up on his own his career went down the toilet. A well know journalist wrote about Clarke that 'He's in his inexorable slide toward irrelevance.' He almost packed in golf altogether at Easter this year. He practiced so hard but was not getting rewarded. Disillusioned and frustrated he faced a cross-roads.

He decided to move back home to Ireland and has settled at Portrush (about 3 miles from where I live). His kids are now at a local school and he has a new woman in his life. He got a break in May when he won in Majorca, a small Euro event, but nonetheless a win. Steady results over last few years form saw him rise up the European rankings and qualify for the Open. If there was any tournament he was suited to winning it has been the Open.

Which brings me neatly on the subject of the Open and Links golf. I can understand the feeling that this year's open appeared boring with the scoring. It looked like a US Open but in wind and rain. But believe me as a Links convert, this tournament had it all.
It’s all about being able to use your imagination. These were not the conditions for golf as most in the field know it. The standard equation of distance calculated equals club selection goes out of the window. Hitting a low ball, and softly, is paramount, to reduce the spin that will make it soar and get lost on the wind. Putting becomes no longer a function of line and speed, but of the wind as well as it buffets the ball off line and moves the putter around as if stirring a cauldron of porridge.

You have to look at players like Tom Watson who shot even par for first nine holes on Saturday in the teeth of the inclement weather. The experience of this legend playing in Opens across decades bore through. Take for example the way he played the 4th on Saturday. It is almost 500 yards long, a par four for the tournament, and despite the tee being moved to the left and forwards, this, into the very teeth of the gale, still brought the ferocious Himalayas bunker into play. Watson's three wood put him safely alongside it before he flushed a driver from the fairway; it went no more than 180 yards. His pitch to the elevated green tucked away round a corner to the left finished 20 feet away, but the putt went in. "That," he said to his caddie, as they stood on the 5th tee, "was as good as a birdie."

I think the guys who say the Open was boring have never experienced playing true links golf. It’s only when you stand up and face the wind and rain, face the lack of definition, watch your ball be inexplicably gathered into a fairway bunker 200 yards away, or hear your caddy suggest that you putt from 70 yards away from the pin. It’s when you understand that your normal shots won’t work and that you have to try and hit softer lower spinning shots. It’s when you realise that yardage books are sometimes useless, when you have to hit a 4 iron 150 yards or a PW 200 yards.

Ricky Fowler impressed me this week, as did Phil. Both mentioned the fun they had trying to play these type of shots. Rory McIlroy didn’t impress me this week, he complained and moaned about the weather.

So in answer to some of the criticism of this year’s Open, I can only say to you guys, you need to experience true links golf in this type of weather and build an understanding of how it needs to be played before you can appreciate what you see on the television.
And as for Darren, sure he got lucky with the weather for the first three days. But people have already commented that his shot-making on Saturday was nothing short of legendary. I wish I was there to see that. But he finished it off with grace, style and confidence on Sunday. He showed all of us that a fat, middle aged journeyman can still achieve anything he wants to with the right frame of mind. He showed us that "It's much easier to perform well with a smile on your face than a scowl on your face." I am so glad that he won this, it gives a lot of hope to us all.

And a footnote worth knowing. Ireland now holds 6 of the last 17 majors played. We are now being referred to as a golfing Superpower! 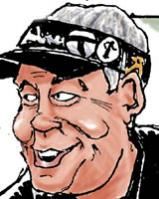 If one of the leaders lived 3 miles from me, I would've been glued to the set too.

Wasn't Clarke known for his extreme party behavior? See - hammered most of the time?

I was impressed with his play - it seemed every shot, from thick rough, fairway, wherever, landed 30 yards short of the green and rolled to 15 feet. If the man could putt we would have won on Saturday.
You must log in or register to reply here.