I believe it was 5 years ago when I first took my daughter out hunting with the intent being her killing her first deer. She would have been 11. She shot all summer and I felt confident she could ethically kill a deer at up to 80 yards or so. Took her out a few times and ended up getting her a really nice opportunity on a big doe at about 50 yards. She decided she didn't want to shoot, which was fine by me. She told me on the way home from that hunt that she didn't think she wanted to go hunting anymore. Also fine by me, I don't want to force hunting on anyone. It's not something that everyone enjoys. It hurt, because I had a great time spending those days in the woods with her as I had looked forward to that since the day she was born.

Fast forward to spring of 2021 and she mentions to me that she thinks she wants to give hunting a go again. Put her through hunters safety, got her shooting again. This time, due to her school sports and other engagements a busy 16 year old has these days, she missed the early youth season as well as a bunch of weekends we could have gone hunting with her on the crossbow.

Opening day of Wisconsin's regular 9 day gun season it was. The night before we picked a spot on the map where we would sit based on the winds and expected deer movement. We would be overlooking an alfalfa field with the south wind blowing our scent into a vast cornfield off of our property. We got there a bit late due to typical teenager time spent getting ready...and then we kicked up a deer walking out. However, not long after sitting down, literally 10 minutes or so, a 6pt buck came out of the woods in front of us and moved away from us down the wood line eventually going back into the woods he came out of. Not even 5 minutes later a doe came out of the woods from the same spot the buck did. Aria gets the gun up and is about to take a shot on the doe when the buck comes busting out of the woods and attempts to run that doe back into the woods she came out of. He gives Aria a 70ish yard broadside shot. See pics for the result! 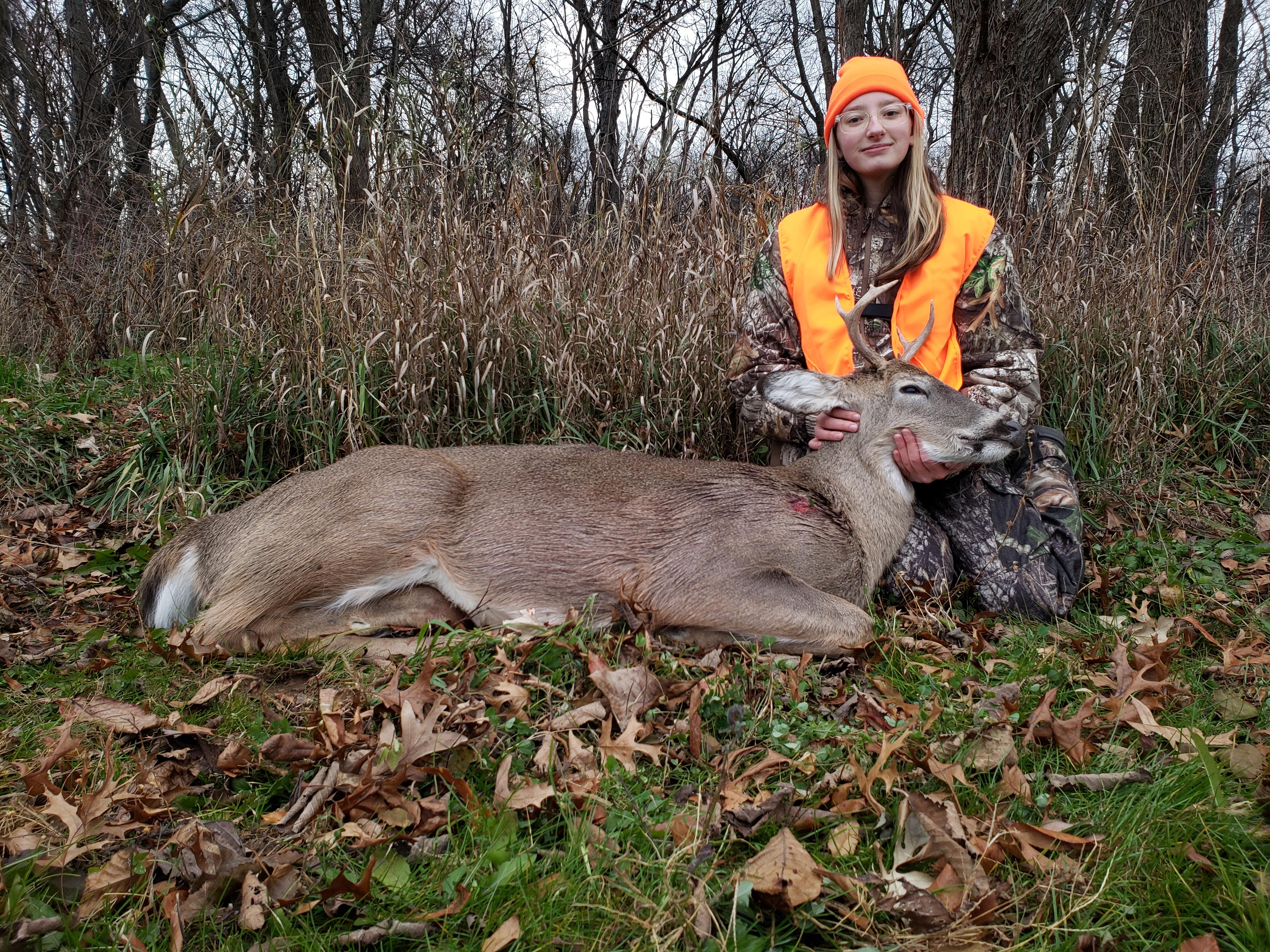 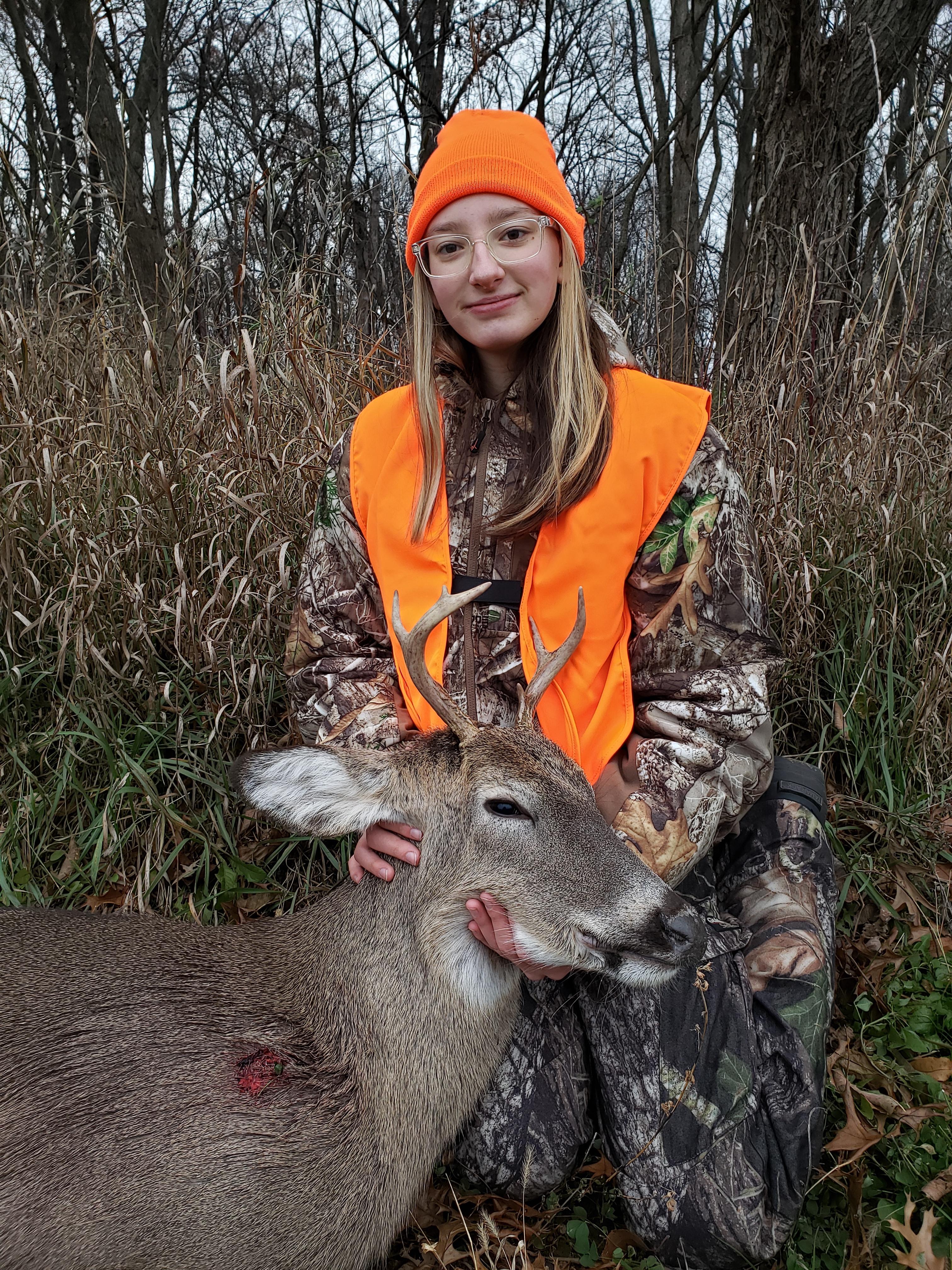 I didn't know you were that old clark. Nice deer and pretty daughter. I haven't seen any and have been in White River Marsh all day with all the parking areas filled up and not heard a shot.
OP

Nice kill! Now, about your daughter...nah, I've already got your wife.

Introduced her to something and allowing her to decided if/when she’d take the interest in it. Love that dad move for sure!!

Better to have the memories of shooting it and eating it than memories of hitting one with your car!!! Our course superintendent totaled his car 10 days ago hitting a doe. Our granddaughter's roommate totaled hers when a buck ran into her while driving on I-70. Two does ran in front of her. While she was braking the buck tried to dodge her but his back end caught the front fender. The car spun him around, antlers breaking the driver's side window and his front quarters caving in her driver's door. The poor girl is only 19 and was scared out of her wits. The pictures showed where the antlers hit and took paint off the car.
Our state averaged between 12,000 and 15,000 deer/vehicle accidents a year.
You must log in or register to reply here.

Passing of the torch

My teenage daughter's call from NYC