Pretty much anyone I've fished with can tell you I'm not the most outdoorsish kind of dude. I've never hunted in my life. I know next to nothing about the woods and the creatures that frolic there. Yesterday I was talking to a condo sales rep and he's exclaiming about the number of deer that frequent the project construction site. He tells me there's a huge buck in the flock and mentions that it's about time for it to shed it's antlers.

I'm such a city slicker I never realized deer dropped their antlers. I figured a big 20-30 point buck had been growing that big rack for it's entire life. I didn't question him, but I assume he's right?

So now I have another deer question. I have a home office in my basement with a patio door out the side of my house. Last week when there was snow on the ground, I noticed some tracks and a depression in the snow next to a retaining wall where it appeared a good size animal had laid down. When I let my dog out he wouldn't stop sniffing around this depression. Since he's prone to rubbing himself in smelly substances I cut that short.

Today I went out this door and most of the snow is gone. I'm looking at the spot where I assume the animal had nestled, and something seems out of place. I look more closely and I'll admit I was a bit startled. Is it possible that deer not only drop and re-grow their horns, but also their leg(s)? Are they like a crab or lobster?

It appears the deer nestled in the snow next to my house and retaining wall left one of his/her limbs. 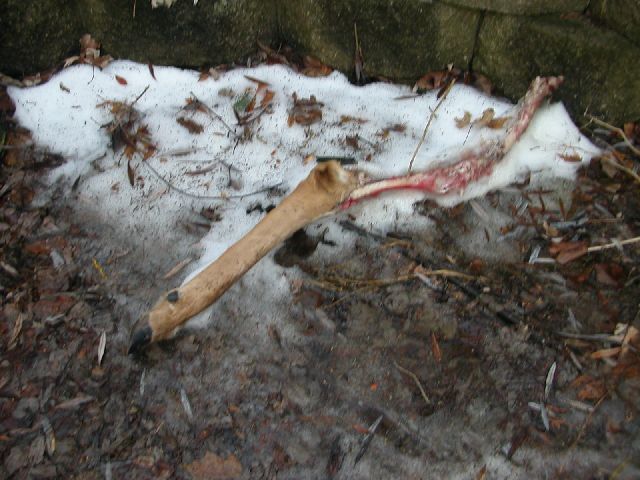 That's either from a coyote or a wolf dropping it there. Enjoy that thought.

When I lived in Minnesota me and two of my best friends ran a trap line for several years. We saw a lot of this, especially in the winter. Could also be feral dogs, they were a pretty big problem there. In fact the most scary moment I've ever had in the wild came when I was face-to-face with a pack of feral dogs. Thankfully we were heavily armed and dispatched several of the dogs before they finally took off for other parts.

DON'T let your dog out alone.

Yep, that's shed deer antler---only not forked so it was from a spike buck.

Something was chewing on that leg. Could be road kill etc and some critter decided to leave you a gift. Hard to know what? Coyote, Another dog, Raccoon, without seeing tracks.

I had a dog whose goal in life was to drag road kill smelly deer hides onto our lawn and roll in them. Granted if he had later tangled with a skunk I would not have known. He just would reek for several hours. We would have to hose him off and bury the deer hide.

He did have many redeeming qualities including being an excellent watch dog. He had a second sense as to whether or not someone or something belonged on our property. (other than rotting deer hides--he was clueless there). A lab doberman mix.

The problem with deer in your back yard is #1- they know which plants are the most important to you and will deprive you of that pleasure. #2 The deer tick (aptly named) is the primary carrier of Lyme's disease. A nasty syndrome I would prefer not to deal with.

That coyote had a tasty meal I'd say.

Deer shed their horns every spring and keep growing larger ones until they reach a certain (old) age. Genetics and food source dictate how large they get.

The deer could have been wounded from gun or bow and chewed off his own hanging leg. That is very common. Or it could have been left by a predator like R35 said. There are many "yahoos" in the woods hunting who have no business doing it. They maim deer all the time and the whole hunting population's reputation takes a hit from the few idiots out there. But you would be amazed at how well a deer can run on three legs.

And if that was a deer laying there keep the dog away since there could be ticks from the deer as zaphod said.


The dear I hunt only shed their clothes.

JEFF4i said:
The dear I hunt only shed their clothes.
Click to expand...

So they can show you their horn?:laugh:


Nope, so I can see some white tail!

JEFF4i said:
Nope, so I can see some white tail!
Click to expand...

There is a deer we see every now and then hopping around the golf course with on three legs. She still has her 4th but doesn't put any weight on it. Wonder if she made it through the winter...

I'm thinking about setting the leg on top of the wood pile at the back corner of my lot for a few months until it's nothing but bleached bone, then sanding down one end and jamming it into an old Zebra putter I have laying around. If I could get proficient (and I might as well face it, I can hardly putt worse than I already do) with this deer leg bone putter, I think it could be very disconcerting to match play opponents.

Doubly so if I gnawed the bone while waiting my turn to putt.

Esox said:
I'm thinking about setting the leg on top of the wood pile at the back corner of my lot for a few months until it's nothing but bleached bone, then sanding down one end and jamming it into an old Zebra putter I have laying around. If I could get proficient (and I might as well face it, I can hardly putt worse than I already do) with this deer leg bone putter, I think it could be very disconcerting to match play opponents.

Doubly so if I gnawed the bone while waiting my turn to putt.

lmfao....wow....thats about the best thign i have read all day...
You must log in or register to reply here.

Roping a Deer... long but a fun read