Do you really do Hogan?

dave. said:
That is the whole point of my thread, imo he wasn't over cooking the arms taped together picture.
Click to expand...


Yep, we've been over this before, d. I agree that the arm position he illustrates would take advantage away from both, resulting in a big muscle, "Iron Byron" effect. But I submit the attached photos, which show, I think, that he didn't do it this way. I think he was much more married to the "elbows to the hips" setup.

Also, don't forget the past thread. It had some good stuff. 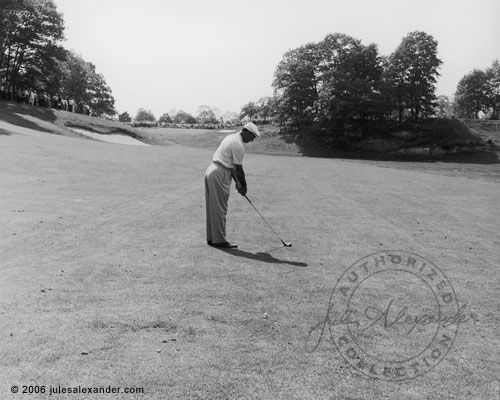 Plus, it's really cool hearing this stuff from someone old enough to have seen it in person!

Regardless of what method you use, you still

have a somewhat rounded swing with which to hit fairly straight shots. Whatever you do during the swing does not matter that much so long as you have retained power for impact and that impact is pretty much square to the line of flight.

Do we hit the ball with the hands? The hands are certainly holding the club, and that grip has to be fundamentally sound. But the power of the swing is certainly not found in the hands. The tip of an airplane's prop has the greatest speed, but back there somewhere is an engine, much removed from the prop, where the power is first being generated. The core muscles, big muscles, are the engine of the golf swing regardless of what plane happens to be. Get the big muscles moving correctly, stay connected, and all the hands have to do is do a sort of fine tuning of making square contact. The hands do not have to strike at the ball.

And the arms? Manuel de la Torre says that the hands take the club back, and the arms then swing the club on the down and through swing. But he further states that when he speaks of the arms, he means only the upper part of the arms and definitely not the forearms. In his thinking the forearms are very much like the hands in that they do not control the club.

All that I am saying is that there is more than one way to swing a golf club. Hogan came up with a way which is very effective IF, like Dave says, you have the time and are willing to do a whole lot of "digging your game out of the dirt." A certain amount of digging is needed regardless of whom you choose to model your swing after, or what teacher's ideas you choose to follow. Hogan deserves the study that he receives because he his Hogan. I would be extremely cautious about following the Hogan method to the letter on every detail. Golf is difficult enough as it is. Some of the great golfers like Hogan and Tiger are doing things that are very difficult. I would suggest the swing of Ernie Els as one that might be a little easier to learn and quite stylish as well.

Farquod.Good point,HOWEVER,the kety was to get the elbow pointing to the right hip,so the inside of the elbow points to the sky and different players will achieve this in different ways depending on their stature,size of muscles in the arms,length of arms,gut size ete etc etc.So while looks like Hogan has his right arm hanging quite freely,actually it was turned so the inside faced the sky,it had a slight bend but the arms were tugged togther to the point that he could easily keep headcovers under his armpits for example,and still swing hard

The key is where the elbows point,to be on plane going back
You must log in or register to reply here.

R
How many golf swings do you have?
2