Fred Couples: I can walk around Riviera and shoot par 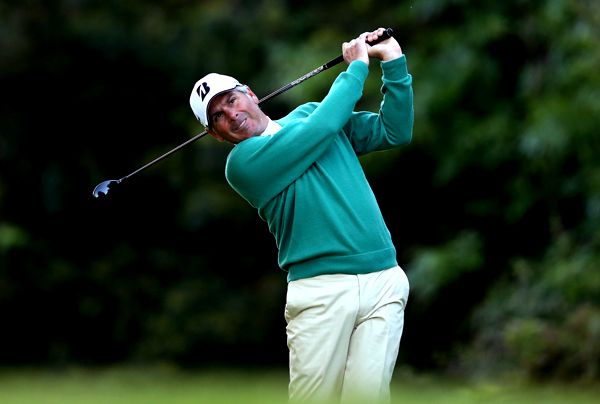 Fred Couples hits his tee shot on the 12th hole at the Northern Trust Open on Thursday (Getty Images).

Earlier this week, Fred Couples said he could walk around Riviera Country Club and shoot par. Turns out he can do a little better than that.

Playing on a sponsor's exemption, Couples shot a three-under-par 68 on Thursday at the Northern Trust Open to end the day near the top of the leaderboard.

"If I'm playing well, I can walk around this course and feel like I'm going to shoot par or very close to it every single time," Couples said Wednesday.

Couples's history at the Northern Trust Open includes wins in 1990 and 1992 and several close calls, including the 2009 event won by Phil Mickelson. Now 53, Couples plays primarily on the Champions Tour, but he still has the game -- and the length -- to compete with the young guns on the tracks he loves, especially at Riviera and Augusta National. He more than held his own with playing partners Bubba Watson and Lee Westwood on Thursday. (Westwood shot 68, while Watson shot a six-over 77.)

"Northern Trust has been very, very nice to a lot of players, but me especially to give me a spot," Couples said. "But you know, there are some tournaments where I feel like people deserve to play and I feel like I deserve to be in this field. I've played here a long time and had a lot of great finishes."

Couples also had the inside scoop on why Tiger Woods isn't at Riviera this week from his former caddie Joe LaCava, who is now on Woods's bag. Couples called LaCava earlier in the week to see how the New Jersey resident was dealing with the Northeast blizzard.

"Besides getting 25 inches of snow to see if he was okay, I asked if Tiger was going to play," Couples said. "He said he talked about it but he's just not going to play."

Couples said he wasn't surprised Woods passed on Riviera this week, but he thinks the course would favor Woods's game.

"When I was a good player, I didn't play a lot of tournaments and I felt like I just couldn't prepare for other ones," Couples said. "But I'm surprised he's not won here before. I would think that if this is a good course for him, it's got to be a really good one for him.

"And the same as Phil," Couples continued. "I think Phil didn't play here for a long, long time and then came back and now I bet every time he plays, he feels like he's the guy to beat."

For Couples, Riviera is one of his three favorite PGA Tour courses, along with TPC Sawgrass and the Memorial.

"Obviously when you pick majors, it's a different story," Couples said. "Augusta is my all time favorite."

Source: Fred Couples: I can walk around Riviera and shoot par
You must log in or register to reply here.

Riviera: Greats Who've Won There (and Two Who Haven't)

Another Toshiba for Fred Couples