HOW MANY SIT-UPS CAN YOU DO? Hall of Famer Gary Player, who recently turned 77, can do a thousand. The South African golfer started working out, eating right and getting his rest in 1953. He never stopped. 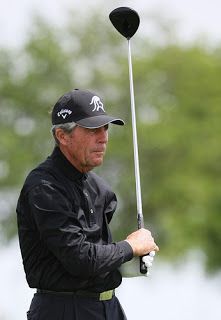 "In 1953 I started exercising with weights, and there were only two of us who did it, Frank Stranahan and myself. Now I’m 77 years of age and still as fit as ever. I can still do a thousand sit-ups, and I work out with weights every week. I’m very careful not to eat food with high fat and excessive sugar; I’m probably about 75 percent vegetarian and it stood me in great stead."

Player, nicknamed "The Black Knight," claims to be the world's most-traveled athlete. He has been flying around the world to play in golf tournaments for 60 years. Walker asked Player for a travel secret.

"Yesterday I left my ranch in South Africa [to fly to Florida]. I set my alarm for 20 past 4 and I got up and exercised profusely. If you exercise profusely, then when you get on the plane you’ll be able to sleep well. I watched everybody around me eating like it was the Last Supper, and all I had was three bananas and a lot of water. The worst thing you can do is overeat on these planes, having these drinks and eating all this fatty bacon. I just don’t understand it."

Player is one of only five men who has won all four majors. He also has won six majors on the Champions Tour and amassed 165 professional victories.

Sad news indeed, may she Rest In Peace!

Gary's going to be dead by the time this thread gets replaced.
You must log in or register to reply here.

Tribute to Alfred 'Rabbit' Dyer, Hall of Fame Caddie for Gary Player and Others, Dead at 82

An Enigmatic Player Who 'Lives Down to Expectations'

Bad Boy Bobby Locke, Part 1: 'The Man From the Jungle'