Guess where I'm playing on Friday? 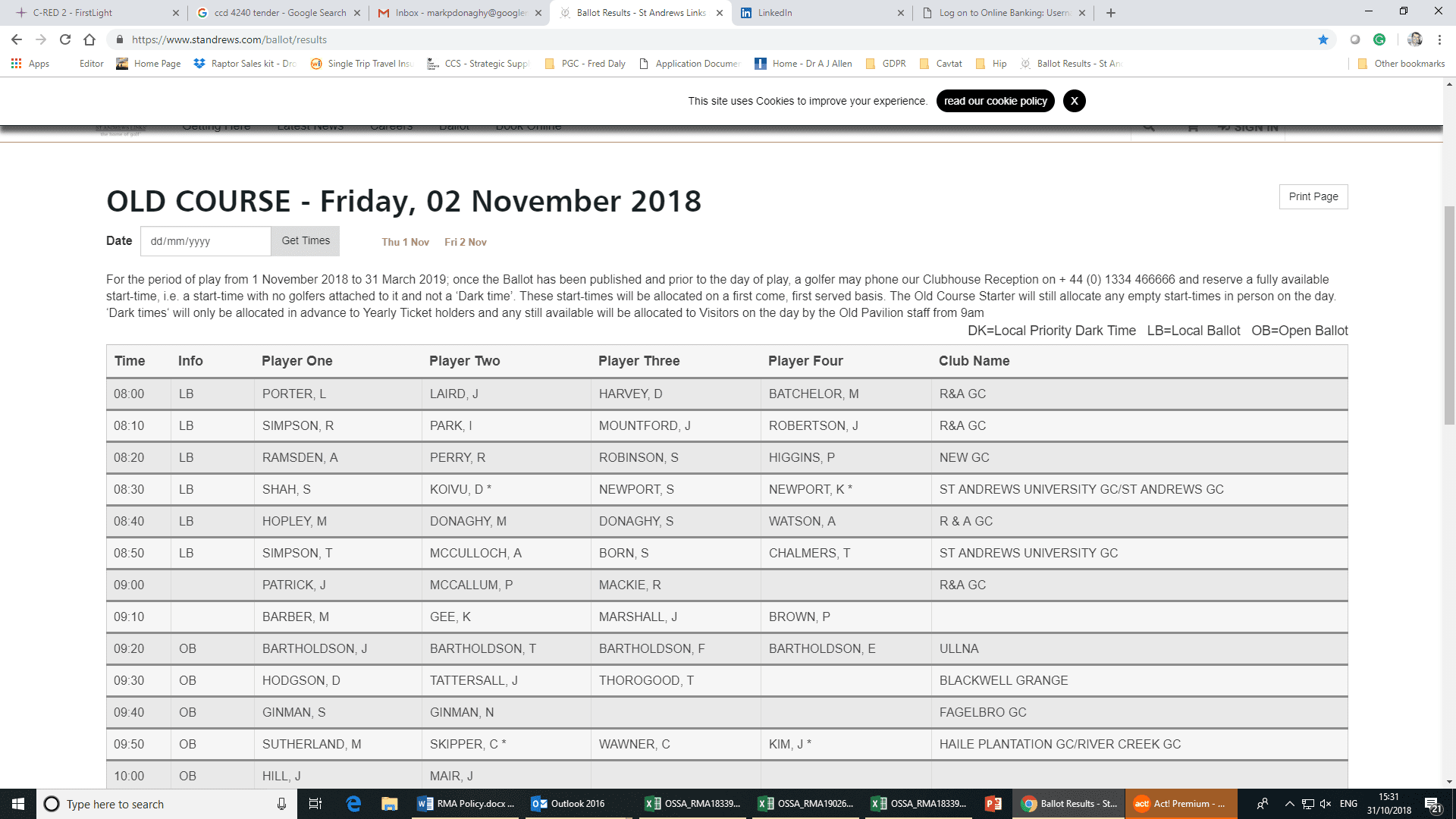 Check out the 8.40am slot, playing with my 16-year-old son! Forecast looks decent.

Looking forward to some sexy poses on the Swilcan Bridge!

Ok arrived in this evening to St Andrews. Forecast is great for tomorrow, can’t wait.

IrishGolfer said:
Ok arrived in this evening to St Andrews. Forecast is great for tomorrow, can’t wait.
Click to expand...

Many pics are required or it didn't happen.

I will be really cool if it rains sideways on just one hole - for the photo op, and then sunny on the rest.
OP

I’m not even sure where to begin with this trip. It was absolutely amazing from start to finish. I’ve never had so much fun playing this game.

We were up at 5am to make the pilgrimage by ferry and car to Scotland. We stopped in Glasgow and met with #1 son, who is at university, and had lunch with him.

We arrived at St Andres about 2pm and did a quick tour and a visit to Aucterlonies, the local golf shop to pick up souvenirs. We then went to the St Andrews Links practice range for a spot of practice. It has a TrackMan Range set up which meant every bay has a screen giving you all your stats. That was pretty cool. We checked into our hotel, hit the town for some pizza and had an early night.

We had a tee time at 8.20am with a friend of mine who is a member of the R&A. So we got up early, had a big breakfast at the hotel and drove a few minutes to the course. We get to park in the R&A members car park, a few yards from the first tee! We then met my friend in the clubhouse to get changed, drink some coffee and get warmed up. We then meandered down to the first tee on a beautifully sunny, cool but calm morning.

We played the boxes, which for the most part were well forward. Seamus and I took on Martin and his friend, Angus in a friendly match.

Seamus plays off 10, he can hit a ball but can be a little inconsistent. But man he was on fire! He scored an incredible 6 birdies to finish up shooting 74. That’s his lowest round ever, not a bad place to do it, at the home of Golf. I was in awe of him, his only mistake was he hit it OB on 16.

I shot 76, which I was pretty stoked about. The highlight of the round was at the short 9th. Off the forward tees it was about 265 yards. We both hit out tee shots to about 8 feet!! Seamus horseshoes and I missed mine left but we both have kick-in birdies!

So we beat the Scottish locals, with my son birdieing the last in style! He was the hero, with our opponents praising Seamus for his sterling play.

We went in afterwards to the R&A clubhouse for lunch. It was like being in a golf museum. It was full of history, paintings, old clubs, trophies, you name it. You are not supposed to take pictures but I managed to sneak a few in, what the hell, right? I don’t think I will ever be back there.

Lunch was great, upstairs, very formal, jacket and tie. A great experience, especially for my son. After lunch we got a mini tour of the rest of the building, which is bigger than it looks from the outside. It was AWESOME!

We said our goodbyes and raced on up to the Fairmount course, and had enough time for 9 holes on the Torrrance Couse. It has great views of St Andrews and was good fun. Not a patch on the Old Course but a good test. I scored a tidy 37 for the nine.

We then drove 90 miles to North Berwick to meet another old acquaintance, an old flat mate who put us up in one of his apartments. We had dinner and a reasonably early night. He owns a few apartments and rents them out, primarily to golfers. He also caddies a bit during the Summer. But mostly he married well, so enjoys life to the full. He’s a great guy, brilliant fun and I always love catching up with him.

Bacon baps and coffee for breakfast. And then we walked from the apartment to the course, about 300 yards away to the first tee for a 7.30am tee time at North Berwick. It was very windy but not too cold. Wind was up to about 20 mph so was tricky enough. It’s a great links course with loads of character. There are walls running through the course. I shot an 82, which, considering the wind was good. I didn’t lose a ball. If a few more putts had fallen, it could have been better. Seamus struggled in the wind, as did my friend. He’s a great player, at one time holding the course record of 65, which he shot twice, back in the day. He putting was phenomenal.

We played a quick round and the headed off for the second round of the day, a few miles away at Renaissance. We followed him up in his car. I knew we were in for something special, when we arrived at the gates, which were electronically controlled. We were met at the bag stand by a chap who took our clubs. Lunch followed in a very swanky clubhouse. There was no dress code but you could smell the opulence. This club is ultra exclusive. It only has about 200 members.

We teed it up at 1pm, no sign of the wind relenting. We chose to play off the forward tees, which made it more enjoyable, as it is 7,300 yards off the tips. It was a struggle for me, but I managed to score on every hole and again didn’t lose a ball, but the chipping and putting let me down. I shot an 84, but should had been 4 or 5 shots better. And son #2 git a bit tired. But it was amazing fun. The Couse is going to host next year’s Scottish Open.

Afterwards we enjoyed the whirlpool hottub. My bones were so tired. I can’t believe my hip stood up to the challenge, but I had plenty of pain killers and anti inflammatories in me. I found it hard to get out of that tub.

We had to take off pretty quickly afterwards, to make the long journey back to the ferry. Where I now sit typing up this adventure. Son #2 is fast asleep, he had such a blast over the last few days, especially at St. Andrews. I’m shattered but I couldn’t have asked for a better few days.

I face surgery in 5 weeks time. These memories will get me through it!

The experience of a lifetime!!!!

Awesome! Glad you were able to push through with your busted wheel.

Are you still hitting the Taylormades?

Seamus rips one at the 17th, Road Hole!

subsonic said:
Are you still hitting the Taylormades?
Click to expand...

I am Jack. They aren’t going anywhere. Now if only I could find a flat stick.
You must log in or register to reply here.