I must confess I have something of a dilemma following today. Allow me to present into evidence this ball which was used at hole 7, a par-5 of around 534 yards. 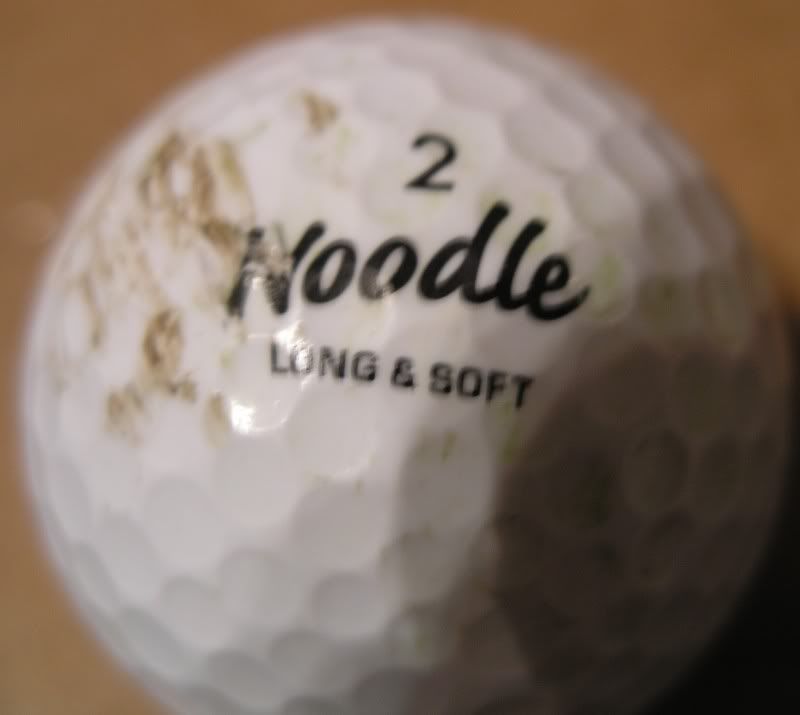 Notice the scuffing just above the word "Noodle." This scuffing was given to the ball thanks to a less than stellar tee shot pulled to the left. The ball struck the cart path, and bounded forward quite well from that. Subsequently, the user of this ball played a 5-wood that left him a little over 100 yards and up a hill to get to the green. Let the record show that the position there wasn't so fortunate, as the golfer couldn't use a pitching wedge because the loft would likely make the ball catch some overhanging tree limbs. The golfer decided to go with an 8-iron, move it back in his stance, shorten the swing some, and hope to shoot it up the hill and into the throat of the green.

Off the pine straw, the golfer got a clean hit. Too clean he was worried, and a few seconds later was rewarded with a clanking sound. The golfer guessed that he had ripped the 8-iron over the green and into the chainlink fence behind the green that protects the teebox for the 8th tee.

Inspection of the ball towards the back showed it to be of a fellow golfer's, and not his own. Hmm, so the second ball, nearer the hole was inspected, and thus revealed the true source of the previous clanking noise, that the well-struck 8-iron had hit the flagstick, and come to a stop some 4 feet past the hole.

Amazingly, our usually lacksadaisical and erratic putter would go on to firmly stroke the birdie putt.
OP

Don't let the Nay Sayers tell you it was luck. It takes a great deal of skill to 1)Hit a cart path with just the right amount and direction of spin, and 2)Punch an 8 iron up and into that tiny stick from 100 yds.

and the pendulum swings

As it gets colder, I get hotter!!