Good luck with them, Eracer!

I soft-stepped these because they felt just a little stiff, and a bit too short. Kind of like dave. Where the hell is dave, anyway...?

Anyway, my first session with them (post-fix) was a round with ualtim and eClark on a glorious Florida winter morning at Timacuan Golf Club in Lake Mary.

First, a few words about the clubs: I couldn't be happier with the change I've made. The irons feel better to me now, and my distances are back where I think they should be. Keep in mind I don't use a 4-iron, so it was a perfect fit to put the 4-iron shaft into the 5-iron head, etc. Got me the club length I was looking for, as well as the distance I was missing.

So, what about the round?

You will notice that earlier in this thread eClark made a smart-ass comment about laughing at me when I played the limeys. He did better than that - I loaned him my 5-iron on the 10th tee, since the el cheapo irons he borrowed had been giving him fits all day (30 year-old Mitsubishi Image irons with about 2" of offset and shafts that would probably fail even as tomato stakes in Rock's garden.)

Here's what he handed me back: 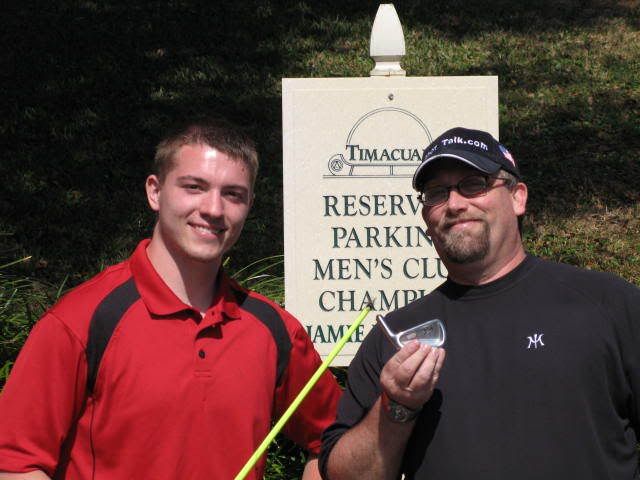 I'm just funnin' - I'm sure that scraping epoxy off the tip with a razor knife and gouging the graphite had absolutely NOTHING to do with why the shaft failed. Nope, nothing to see here, except Mongo's 210 yard 5-iron striped dead down the middle of the 10th fairway. It was actually pretty funny - he smoked the ball, said "That's more like it!" then handed me the iron and said, "Is it supposed to look like this?"

As for the rest of the round, we all had fun, and I'm sure that eClark would demolish me in a real match using his clubs. He's got a real nice golf swing. If I can fix my chipping by April, it might be another story. Yeah, right....

Sandwedge couldn't make it, since his son decided to start vomiting like a cuckoo clock (once an hour, on the hour) around 1:30am. Missed you out there, bud. Hope all is well.

Tim and I both played reasonably well, each of us hitting the ball decently (for 18 cappers...) all day long, putting well, and generally having a good time. Tim nailed a long putt, and putted one in off the fringe, and was STILL talking about his next putter project. Stop that. Right now. Tim also hit the shot of the day when he pulled a fairway wood out standing 230 yards from the green, said "I really shouldn't do this," and proceeded to hit a gorgeous arcing shot that would have made Rich Beem proud. Hell of a golf shot.

Here's a few more pics. It was great to meet you eClark, and I look forward to teeing it up again in April up in Tennessee. Tim - always a pleasure, man. 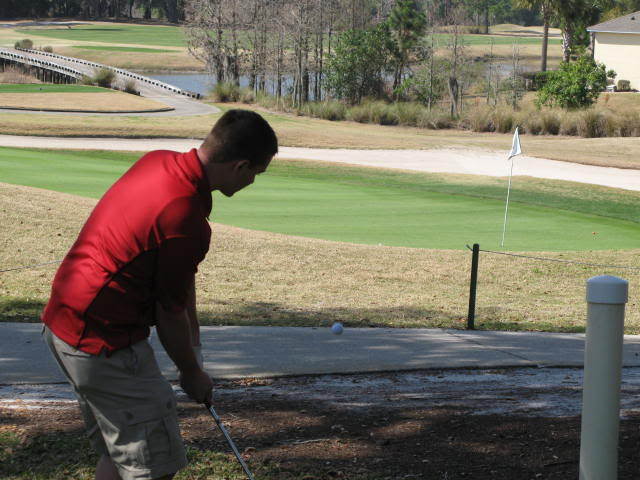 Me, finishing my 8-iron swing on a 150-yard hole. Stopped 5 feet from the hole. Sunk the putt for the bird. Woohoo! 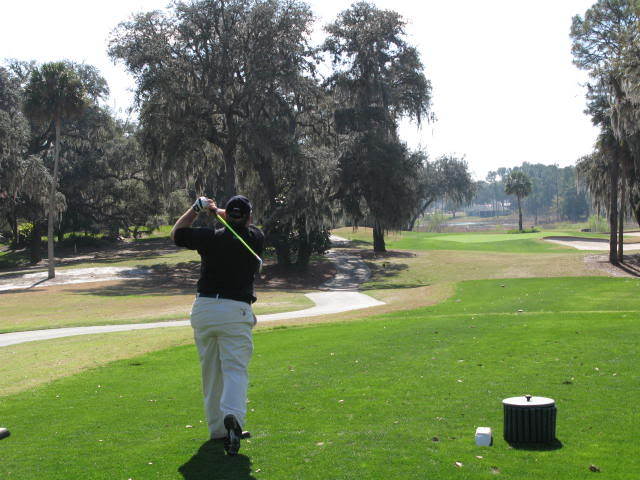 The guy on the patio asked if they were playing an "Out of Bounds scramble... 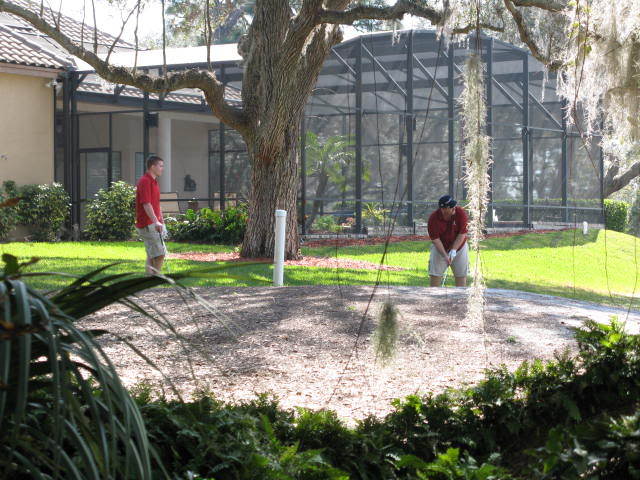 Tough hole - you had to hit to a peninsula, then again over water to a small green. 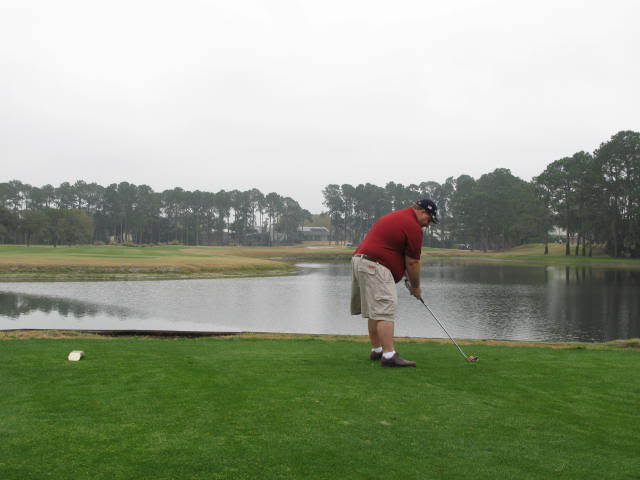 All you northern folk: Note the white Wisconsin legs... 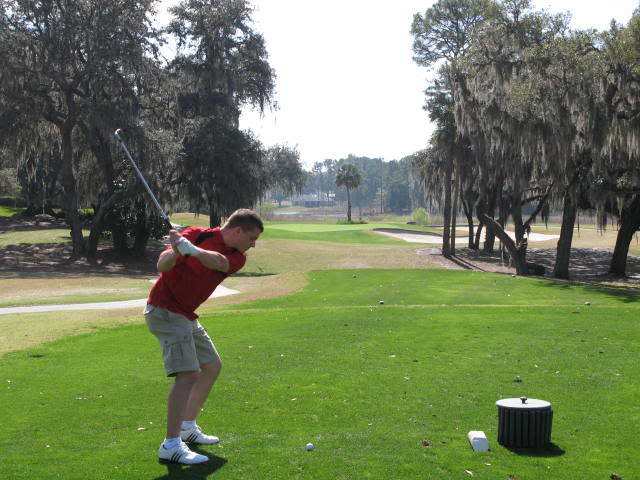 One last image of Florida in February.... 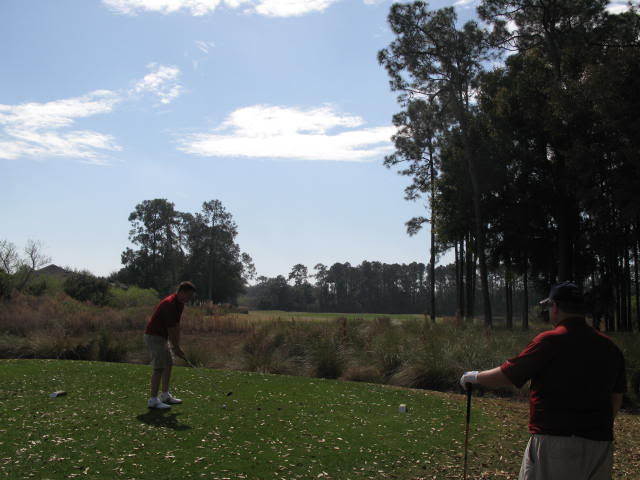 I can't believe ya busted a Limey!

Send it back to me....I should have some demo shafts around I can probably dig one up and substitute it...

Clark looks nothing like the caveman I had pictured in my head.

Wi-Golfer said:
Clark looks nothing like the caveman I had pictured in my head.
Click to expand...


I know, right? I had him for a burly monster for sure...

His trigger finger is burly. 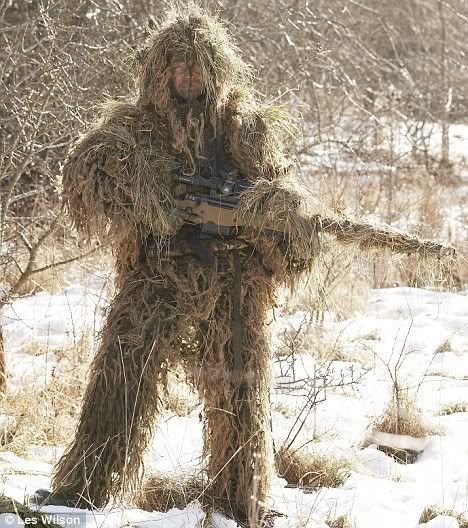 indacup said:
AHHHH!!!
I can't believe ya busted a Limey!
Send it back to me....I should have some demo shafts around I can probably dig one up and substitute it...

Rory, that's a hell of Man!!! Damn proud to post on the same forums with you!

Always amazes me the difference between our image of people in our heads and what they actually look like.

That 5i really felt great. I didnt even notice anything odd about the shot that would have tipped me to the fact that i broke the shaft....it wasnt untill i looked at the clubhead and noticed the ferrule was broke that i noticed something was wrong. And even then i thought i just broke the ferrule on it or it was already broken before i hit.

Great clubs though...i might have to look into getting some limeys! Then i will have to laugh at myself everytime i go golfing...
You must log in or register to reply here.

Bunch of stuff needs to go!