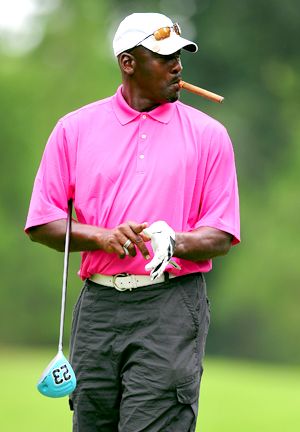 ​
As he strives to regain the title of World No. 1, Luke Donald has enlisted the help of Michael Jordan, according to a report by the Telegraph's James Corrigan.


“He’s good for the mind,” Donald said. “He’s been making sure that I’m ready mentally. It’s been good to pick Michael’s brains and find out what he was thinking about when he was playing basketball. He’s always trying to play mind games. He doesn’t like to lose.”
​
Since meeting at The Bears Club, Jack Nicklaus's Jupiter, Fla., course, the two have become friends, spending time on the course together.


“Michael’s a really nice chap who I’ve got to know really well recently,” Donald told Telegraph Sport. “His fiancée [Yvette Prieto] is good friends with my wife [Diane] and we’ve begun to play a lot together. I’m always happy to empty his wallet.”
​
After recording four victories in 2011 and spending much of the year ranked No. 1, Donald has dropped to No. 3 in the Official Golf Rankings behind Tiger Woods and Rory McIlroy.

Photo: Michael Jordan at the Hooptee Celebrity Golf Classic at the Golf Club at Ballantyne in Charlotte, N.C. (Getty Images).

At least Donald can now tap into Jordan's supply of hookers and strippers.
You must log in or register to reply here.

Luke Donald: Hanging In Rather Than Hanging It Up