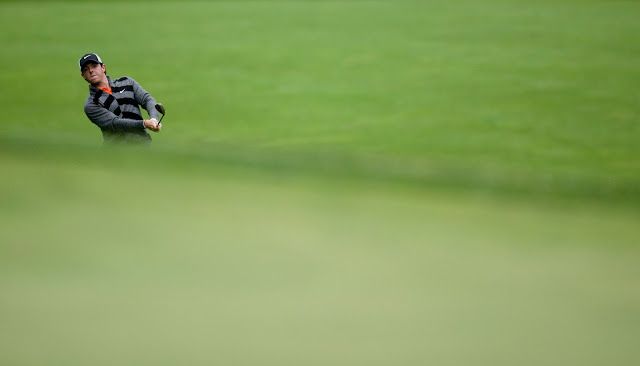 THEIR DAY BEGAN EARLY. RORY MCILROY and Tiger Woods resumed their first round at 7:13 a.m. on Friday and both finished with a 3-over 73 on Merion's East Course. A short while later, along with Masters champion Adam Scott, they were on the tricky layout again to play their second round. They both went around in even-par 70, a tidy score on a breezy, mostly sunny Friday.

"I played well," Woods said. "I just made a couple mistakes out there today, but I really played well. Maybe I could have gotten one or two more out of it, but it was a pretty good day."

"I really like it," McIlroy said about playing in the U.S. Open. "You're under pressure from that first tee shot and you got to put your ball in the fairway every hole .... And when you do, there's some holes that you can take advantage of and there's some holes that you just have to try and make par and move on. So it's a great test and it's a test that I am enjoying this week."

Merion is playing tougher than expected. The first-round scoring average was a shade over 74. Besides a 67 by Billy Horschel, no one else has cracked par as of late Friday afternoon. Scott, the other member of the star grouping, struggled to a 75 in the second round after opening with a 72. The Aussie is in jeopardy of missing the cut.

How did Rory enjoy Tiger's company for the first two days at a U.S. Open?

"We still get on well and there was still a good bit of chatter out there and a good bit of needling every now and again. I said something at the last that I was trying to make that putt so I didn't have to play with you [Tiger] tomorrow .... t's always good fun with them out there."

At 3-over 143, McIlroy and Woods will be around for the weekend. Moreover, they're in contention to put their name on the U.S. Open trophy yet again.

Source: McIlroy and Woods Trade Jabs and Match Scores
You must log in or register to reply here.