So I pop out to the range during lunch to hit a bucket of balls. I am about half way through when 2 young guys show up. They are about 18, and both big boys. They start hitting balls next to me. Well the guy right beside wasn't bad and hit them pretty good. Then his buddy starts hitting. Well the sound caught my attention immediately. Without even looking I knew this guy was pounding them. So I take a few steps back and watch this kid hit a few. First of all this kid is about 6'4 230, and quite athletic looking. The range is big, and according to my laser has a fence at the boundary that measures 295 yards, the fence is easily 40 feet high. This guy is hitting them over the fence, one after the other. I watch him hit about 10 balls in a row over before I had to ask him a few questions. I just couldnt help myself. I asked him if he has ever been fitted, or does any LD competitions. He said no, he only golfs about 5 times a year, as he focuses all his time on hockey. I asked him if he has ever had his swing speed measured, again he says NO. So I ask him if he would like to, and he says sure. So I bring over my portable swing speed radar and have him hit some balls. In all my years I have never seen anything like this, not even close, not even in this ballpark. I told him to seriously pursue some LD comps as this guy would be a winner, possibly even a world champion. I wish I had my camera there so I could tape his swing. I gave him my card and he said he will call and come see me. I sure hope he does. Here is a pic I took of the radar when I got back home. This was a hammered high draw that cleared the fence by a good 30 feet and had to have gone 450 yards. 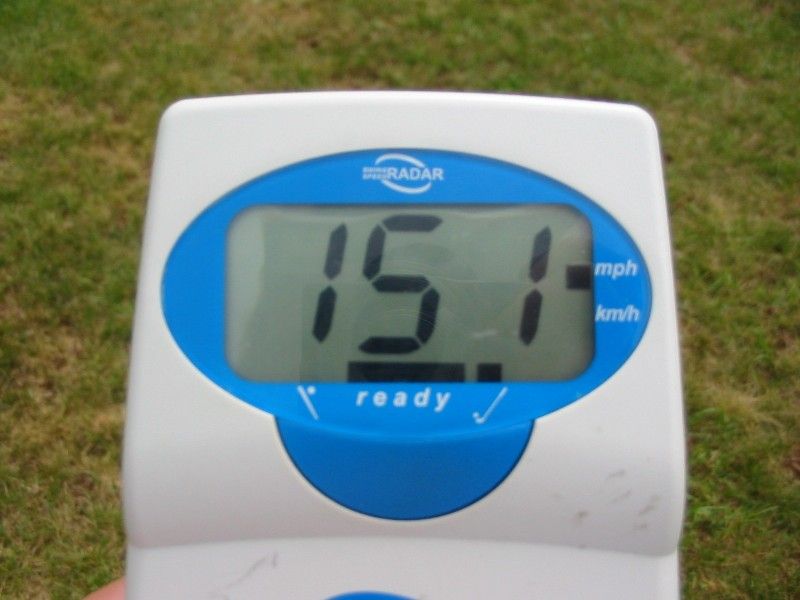 Damn! I would love to see some video of this if he calls you back to get fitted.

Thats what she said

wow, that guy could be a freaking beast, as long as he can hit them dead straight.

What is it with those hockey players? That ss is beyond my comprehension. I can not imagine what that swing would look like. :shocked:
N

you need to CONvince him, that he needs an Agent/Manager...whats the take 35% of the winnings ? hehe.

you just discovered the next rock star

I can guarantee you that the first time you see it you could not help but say "holy fuk". I just stood there in disbelief, I didnt even know what to think at first. It almost seemed surreal. The guy was hitting an older model driver to boot, a Cobra 427SS or something along those lines. It had an X flex UST proforce gold in it and looked like it had been dragged behind a car for a week. All his clubs looked like they came from a garage sale. I really hope he comes to see me. I could have him hitting bombs that would make sick watching.

Only Drinking AFTER Golf

Good lord, not only should you have given him your number, but taken his as well.
OP

bluebledthesea said:
you have given him your number, but taken his as well.
Click to expand...

I keep thinking this myself. I am not even sure the guy is from around here, I didnt even ask his name for crying out loud. I was literally stunned and lost all ability to think properly. Like I said, the whole thing was almost surreal.

I have never seen anything like it. This was so far above and beyond anything I have ever witnessed in person. I must have said "wow" three hundred times in an hour.
C

Wow, hopefully he isnt like ruining his body by swinging that hard. LyleG you have a good eye for the distance golfer ! 450 yards, i cant even count to 450.

CosmosMpower said:
Man that swing speed is much faster than my driver BALL speed
Click to expand...

LOL, no shit!
I can't even comprehend a swing speed that high.

It would be a pleasure to see it. Hopefully in the future you will have some footage to show us.
You must log in or register to reply here.

Played golf with a "Freak of Nature" today...

J
getting a novice started