My round today...who else played?

Where do you guys talk about your rounds? I guess I'll start a thread if there isn't a forum/thread for this yet.

I played 18 at Valley View in Layton, Utah today. I still consider this to be my home course even though I moved a little farther away to Salt Lake. I play in the men's association Tuesdays and the monthly Saturday tournaments. The weekly 9 hole tournaments start this week (snowed out last week).

I had an 8 (quad) on #3. I pull/hooked my drive into the water, then hit a 3 wood exactly where the drive went. The only way I could do that was to top it and pull it straight left, but I pulled off the shot. Then, I took another drop and ended up with a really bad lie, but had a great 3 wood this time. So, I was lying 5 and still not on the green. Oh well, at least I can't report more than a double hehe.

On the flip side, I birdied 6 and 7. My drive on 6 was ridiculous, though. I pulled it into the trees in the hazard, but it kicked out and into the rough. I hit a sweet 8 iron from there inside 10 feet and made the putt. It's a very easy short hole. On 7, I hit a draw and missed a little left of the green, but it kicked toward the flag. I made a tough 30 footer or so for that bird.

Not much out of the ordinary other than the bad score on #3 . I did get a sandy on #12 from the left sand, though. This sand is way above the green...a rare situation in golf. I was at the edge of the trap and had to play with one foot out.

I will work on a way to let people view other people's rounds that use my site. I go crazy with this stuff and enter information about every shot. I'll attach a link to this message when this feature is available unless you think it is inappropriate.

I took a scenery picture. I'll check it out and upload it if it turned out okay.

I played as a single today. The people I played with varied from being completely loud and obnoxious to quiet and polite. It's always fun to play with different people all of the time. Most people probably play with a small group and miss out on this.

Who else played this weekend? Got pictures?
OP

Here is a picture from today...not the best shot, but it is from today's round. 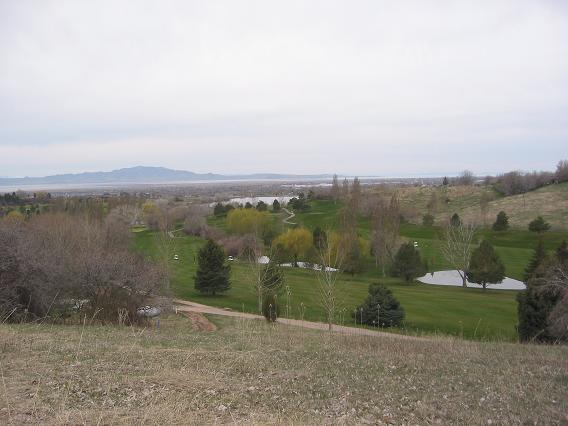 Today was the opening week for the weekly 9 hole "twilight" men's association tournaments here. It's about a 6 month wait between seasons.

As expected, it was an unpredictable early season round. Just like the first tee shot of the season here, I hit my first tournament shot in the same water in the same spot. I started the weekly tournaments with a double.

I one-putted the first three holes and none of the putts were easy. I was given 3 shots for the 9 holes. That was gone after 4 holes.

Here is how I played the last hole; a very easy short par 5:

Drove in the water in the same place as Sunday
Hit a pathetic 3 wood even worse than Sunday
Hit a 9 iron from behind the lip in a sand trap
Couldn't find the ball...it was probably in a tree
Rehit the sand shot with a PW just to try to get back into play
Hit a very fat 7 iron way short
Hit a low, thin SW 30 feet past the flag
Putted 4 feet past the hole
Missed the come-backer
Tapped in for an 11

To make things worse, they probably won't use this score for the course handicap .

No pictures. Maybe I should have taken a picture of the water, sand, tree, sand, and rough on 9 and attach them to the round to remind me later...

Sweet pic. I like the layout of that course.

Some of those UK guys should take a long look at this and plant some trees...

Keep the pics coming, looks like a great place.

Also like your site. I am not in a league per se' so I cant use that feature though. I think you will succeed as you have some features not available elsewhere...
OP

Thanks for the compliment. Here is a feature I literally just created...the ability for anyone (member or not) to view a My Golf Domain.com member's round.

Here are links for the two rounds of mine mentioned in this thread. I'm going to add the shot records for the second round after this post.

Everyone is welcome to view the rounds. Hopefully, the next rounds will be a little better .

I don't have pictures attached to these rounds, but maybe next time. I'm playing tomorrow (4/7) at Bountiful Ridge. This is another beautiful course. I will try to remember to take pictures and attach them to the round.
OP

Bravo said:
I like your pics...please keep them coming.

Also like your site. I am not in a league per se' so I cant use that feature though. I think you will succeed as you have some features not available elsewhere...
Click to expand...


The league feature doesn't have anything to do with associations such as the men's association I play in at Valley View. I probably should point this out in the system somehow. You can create your own league for friends or open it up to the public. Leagues can be individual or team. One person/team hosts a match and people/teams request to play in the match. After you play the match at the course, both sides enter the results and any comments. Standings are tracked automatically. TSIM.

Nobody other than myself when testing has used this capability yet. There are only 13 or so people in the community so far. Eventually, there will probably be thousands worldwide.

I LOVE Valley View. I play up there a few times a year. I always play in that two day VV/Bountiful tournament.
OP

My round from today at Bountiful Ridge...

I linked a couple of pictures to this round, but nothing worth posting in the gallery.

I had bogey on the last three holes to shoot 5 over (40). I didn't make a putt all day. Bountiful's greens are known for their speed. It's early in the season, but they were still pretty fast today.

I'm starting to feel more comfortable with the setup and swing, though.

Bonneville yesterday. 75 with a double on a freaking par 5.

Schizoid round for me the other day. Six pars, a bird, 4 doubles and a triple. I'm in the sand on a par 5 in 3 after pulling my approach and card a 7. Ball striking and putting are good (even with freshly aerated greens), but short game feel is just not there. It's killing me. Still, it's only my second round of the year.

My ugly round from last Sunday at Old Mill...

It got too cold for me (and the other two in my group) to play 18. We quit after 12. I thought it would be fun to hit four balls in the water on 13 before leaving .

I posted a very scenic picture from the day in the gallery here. There is one other picture in the page linked above, but not worthy of posting in the gallery .

Played 31 holes Sat. before I decided I better get home to the wife, who was taking care of the grandson. At 18 months old, he's a handful.

Score was so so but the swing is returning. If not for a couple of blow up holes I'd have been back down to h/c so life is good again.
You must log in or register to reply here.

Played my first round of the season...