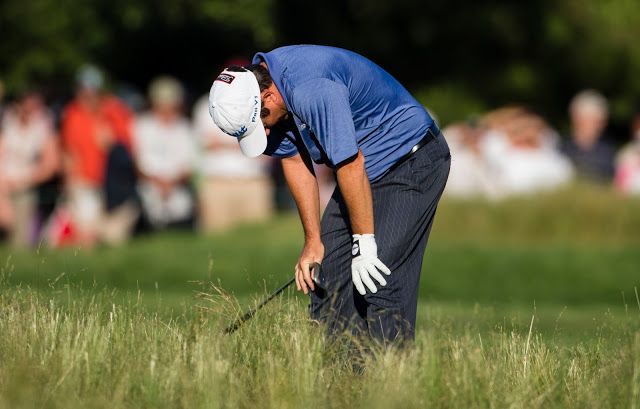 ​
Merion was unkind to Tim Clark on Friday. (Courtesy of WWW.USGA.ORG)​

THE CONCERN AT THE BEGINNING of the week, as biblical rains fell in Ardmore, was this: How would poor little Merion fare against the world's best golfers? One glance at the leaderboard as we await the start of the third round tells the story. Merion is a brute, a smallish one perhaps, but a brute nonetheless. Only Billy Horschel and Phil Mickelson are under par at the halfway point of the 2013 U.S. Open. Both are 1 under and will play in the final group along with Luke Donald on Saturday.

I am reminded of a few things. This is a U.S. Open, after all, and it's playing like one. The USGA are the masters of setting up a golf course to play tough, even one that has seen six or so inches of rain fall on it in a week's time. Another thing: A U.S. Open course need not play long to play hard. This is one hard-playing short golf course.

We also know it's the U.S. Open because some of the happy talk early in the week has turned into pointed and angry talk as the weekend approaches. Case in point: Zach Johnson, the usually diplomatic Masters champion from Iowa. Zach made some un-Zach-like comments about the Merion setup after posting an 11-under total.

"I would describe the whole golf course as manipulated," Johnson said in a story by Randall Mell at GolfChannel.com. "It just enhances my disdain for the USGA and how it manipulates golf courses."

Asked if it was a fair setup, he said, "Not when luck is required. I think Merion is a great golf course, if you let Merion be, but that is not the agenda."

Welcome to the U.S. Open. No one protects par like the USGA.

Others also made comments, somewhat veiled, but you got their drift. The hole locations on Friday had players grumbling to themselves, and occasionally aloud.

"They moved the tee up on 17," said Rory McIlroy, who is in contention at 3-over par. "But they put the pin in a place that's virtually impossible to get to. I felt like I hit a career shot and I hit it to about 60 feet."

"They've really tried to ... protect the golf course with it being as soft as it is," said Tiger Woods, who is tied with McIlroy. "And they've given us some really, really tough pins."

That was Friday on a saturated golf course. This is Saturday, the sun is shining and not-so-sweet Merion is drying out. Who, if anyone, will be under or near par at nightfall?

Source: Not-So-Sweet Merion Produces High Scores
You must log in or register to reply here.

A Brief History of Merion