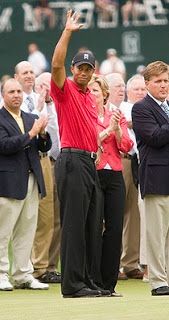 Tiger Woods (McAlpine)​
DID YOU CATCH THAT? TIGER NEVER "TIRES" of Bridgestone (as in Bridgestone Invitational). You know, Bridgestone tires. Yes, GROAN. That was bad. A real smelly one.

There's more than a slight tread of truth in the stupid headline, though.

Tiger actually never does tire of playing and winning at Akron's Firestone Country Club. Woods peeled out (sorry) and away from the field with a second-round 61. After Sunday's cruise (sorry) to a seven-shot victory, Woods notched his eighth win at the WGC-Bridgestone Invitational. That's a lot of traction (sorry) at one tournament.

Sam Snead is the only PGA Tour player besides Tiger to win eight times at one event. (Snead owned the Greater Greensboro Open.)

Tiger's 79th PGA Tour victory moves him within three of Snead's all-time wins record of 82. Now Woods looks ahead to this week's PGA Championship at Oak Hill Country Club, where he'll be the favorite despite a five-year major wins drought.

"No, it's the same. Each and every major, I always want them. I've been successful 14 times, and hopefully next week will be 15."

Following are the current odds for the year's final major, courtesy of Bovada.

Come on Tiger, time to win another major. 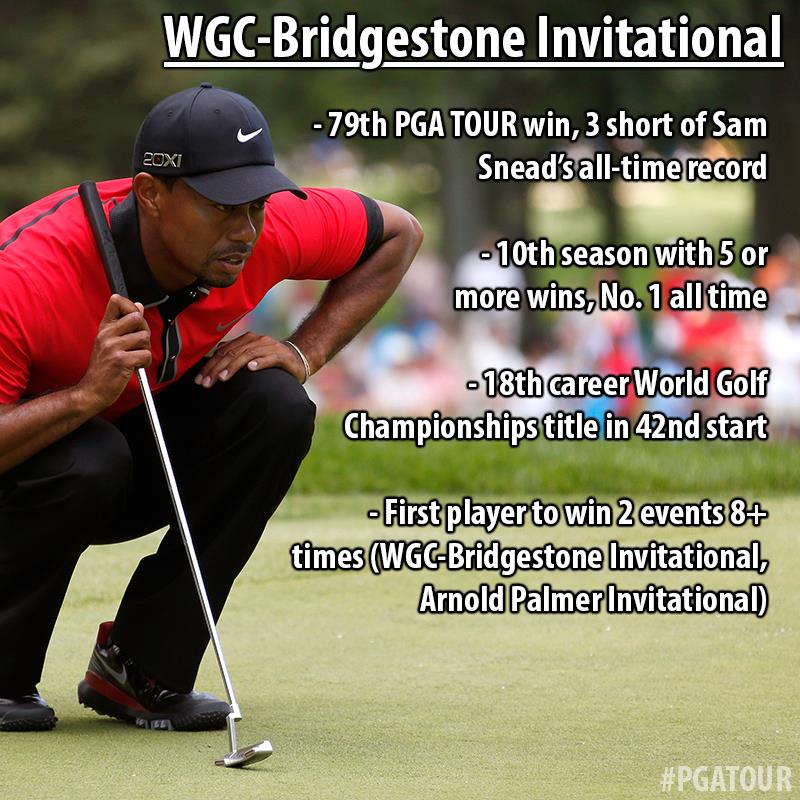 After Dufner turned in a 63 today I was watching the wrap up on Golf Channel. Tiger and his latest swing coach and security were spending time on the range in mental anguish trying to understand what went wrong today. After a while they proceeded to leave. As they walked back out and through a spectator area a little boy about waist high with small poster or larger paper and pen was pacing them and even manage to get out in front of them. It was evident he was excited. Tiger wasnt having it and went around the little guy.

It really flew all over me after watching the staged carrying of his child for the cameras between holes last week when he won. Then actually seeing the footage later used on golf chan in what amounted to a propaganda clip where the commentator cooed over the caring dad. I told my wife it was planned out and sure enough they actually used it.

He's a turd, plain and simple. A very, very talented who will be in the golf record books for years to come, but a all the same.

Dude, I saw him diss those kids after hitting the range. I even commented to my wife about what a dick move it was.

Never been a Tiger fan, and that shit sealed the deal.

Only three of us showed for the first tee time, this morning. Saw a young man walk into the clubhouse. Haircut and the way he carried himself, I figured he was a soldier. Asked if he had a game. Said he was by himself. Told him he was welcome to play with us... as long as he understood practice swings are for puzzies and you need to keep up. He laughed and said he would be more than glad to join us.
As we walked off the first tee, I asked if he was military. He said he was trying to sneak in a round of golf before he deploys to Afghanistan next week. This will be his sixth deployment!!! He said this should be his last, due to the troop drawdown and this one was only to be for six month.
A little later in the round, he said he used to play quite a bit of golf. Once married and with kids, golf took a backseat. Sheesh! Married with kids and headed back to Afghanistan for the sixth time!
He had a bag full of Nike clubs. I made some wise cracks, along the way, about hoping he wasn't the only person hitting it sideways today with Nike clubs. Son-in-law finally explained to him... probably not wanting me to get a whippin'... that I disliked Tiger Woods and, therefore, didn't like Nike gear. Young man had good laugh. He joked with us the entire round, tossing back barbs as we tossed them his way.
On 18, he took off his hat and shook all our hands. Said he appreciated us inviting him along. I told him that when he returned to Ft. Riley, come out and join us for another round and I'd pay his green fees. He laughed and said he'd be more than happy to take me up on that deal. "I may wait until I've played a few rounds before I join you. Just want to be able to beat you with my Nike clubs and have some real enjoyment doing it!"
We take so much for granted in our lives......

Great story limp.
You must log in or register to reply here.