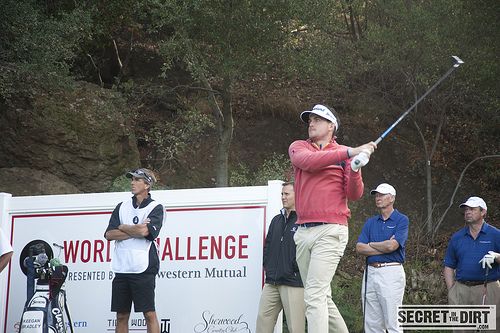 ​
Keegan Bradley will be impacted by the anchoring ban. (Secret in the Dirt/Flickr)​
AFTER ALL THE RUCKUS OVER THE USGA and R&A anchoring ban, the PGA Tour has decided to go along with it. The PGA of America will fall in line, too. I think it's a good thing. I know many disagree. Following are the key excerpts (roughly the first half) of Monday's official statement from the PGA Tour:

The PGA Tour Policy Board today acknowledged that the USGA’s ban on anchored strokes, known as Rule 14-1b, will apply to PGA Tour competitions beginning on January 1, 2016. In making this acknowledgement, the Policy Board also passed a resolution strongly recommending, along with the PGA of America, that the USGA consider extending the time period in which amateurs would be permitted to utilize anchored strokes beyond January 1, 2016.

“In making its decision, the Policy Board recognized that there are still varying opinions among our membership, but ultimately concluded that while it is an important issue, a ban on anchored strokes would not fundamentally affect a strong presentation of our competitions or the overall success of the PGA Tour,” PGA Tour commissioner Tim Finchem said. “The Board also was of the opinion that having a single set of rules on acceptable strokes applicable to all professional competitions worldwide was desirable and would avoid confusion.”

The USGA and R&A jointly announced the proposed ban on anchored strokes in November 2012; then, following a “comment period,” the governing bodies announced on May 21, 2013 that the ban would go into effect on January 1, 2016.

Many PGA Tour players will now have to adopt a non-anchored putting technique in less than three years, including several recent major champions: Adam Scott, Ernie Els, Webb Simpson and Keegan Bradley. And there's also Tim Clark, one of the most vocal critics of the anchoring ban.

How will these and other players adjust?

I think Ernie will be fine. He's already in his mid forties. Scott might be OK; he putted conventionally for a long time. But the long putter, anchored, has been a big part of his recent success. Simpson and Bradley are young and have built their tour careers on anchored putting. They might struggle with the change. Clark, I think, has more or less said it will ruin his livelihood. He'll have to figure it out or get a job at Golf Channel.

It will be interesting.

Webby will make it. Im a fan.

Bradley was a nice guy. He will be missed.

I'd bet on Keegan before whoever Webby is.

I'd bet on Keegan before whoever Webby is.
Click to expand...

Yup, I take Keegan every day of the week and twice in Sunday!

BigJim13 said:
Yup, I take Keegan every day of the week and twice in Sunday!
Click to expand...

Meh...I just cant pull for the Keeger. He is a mental case half the time...waaay to tense. Remember the time he got in the habit of spitting? Fans all had umbrellas. It was bad. Got me started watching his emotional state when he plays. Now that part of his game is entertaining. Him an Na are brothers from other mothers
You must log in or register to reply here.

Keegan Bradley: 'I'm being called a cheater more than ever'
2