Hey--I've got some time so I thought I would throw up some pics of my farming operations. As the season goes on I will try to document what type of tasks we are currently doing.

If you want further detail I can always try to take more pics of a particular operation. JUST LET ME KNOW!!

We will start out with cutting seed and planting potatoes. Potatoes are grown some the same tubers you buy in store except not sprout nipped. There is a sprout inhibitor put on fresh market taters to prevent sprouting on the shelf. Not a good choice for a seed potato. Each seed piece should be around 1.5 ounces with a couple of eyes.


The mother tubers are run through a seed cutter which has cutting disks. Prior to being cut the sizing table on the cutter segregates the tubers by size to present the tubers to the proper array of spaced disks. Some of the larger seed pieces (now cylindrical shaped are then directed a horizontal blade for a another cut to achieve a good size. As we will see later the size profile of a seed lot is important in the proper performance of the the planter.

The first picture is of some people re cutting some seed pieces that are not of the proper profile. The vertical blades are of my design. I used old disk blades to make a stationary knife which the seed piece can be split upon. Much safer than each person having a knife and moving that knife around in space!!!! 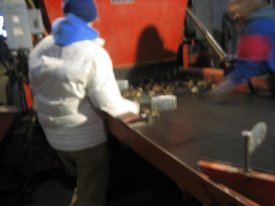 I had more pics of the seed cutting operation but since they were taken in a low light warehouse they were a bit shaky. If someone what's more detail I will try again --just ask!!


Next 2 pics are the seed being unloaded from a semi by conveyor belt onto a potato piler. The piler then distributes the seed into the seed holding tub of the planter. We handle thwe seed as gently as possible. It's worth about $25 a 100 lbs. That relates to about $275 an acres planted. 825 acres on my farm = $225,000 investment. Overall it takes about $3,500 per acres to grow potatoes (fertilizer , seed ,labor ,land costs, etc) which for 825 acres would be $2,900,000. Most farmer's carry an operation loan to cover these expenses during the growing season. Hopefully then sales will be greater than $2.9 million. 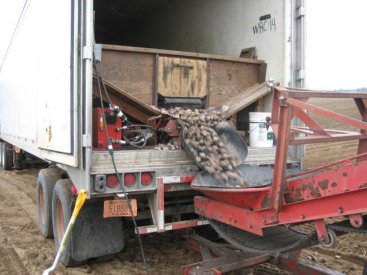 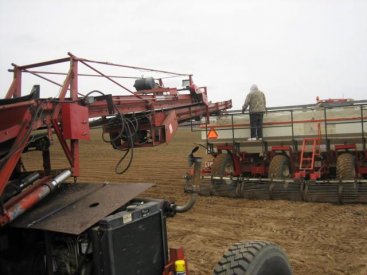 Next is a picture of the front end of the planter. The tanks you see are for some specialized Voo Doo juice put in the furrow with the seed piece. Each farmer has his own mix composed of some popper fertilizer, seed protectant, humic acid etc. The larger majority of the fertilizer has already been put down with a row marker. The planter then follows the row maker's pattern placing the seed over the band of fertilizer placed about 12" deep. The seed is at 8" and spaced from 6" to 15" depending on the variety. 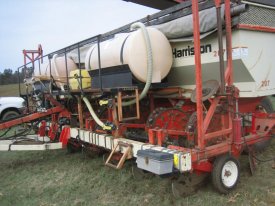 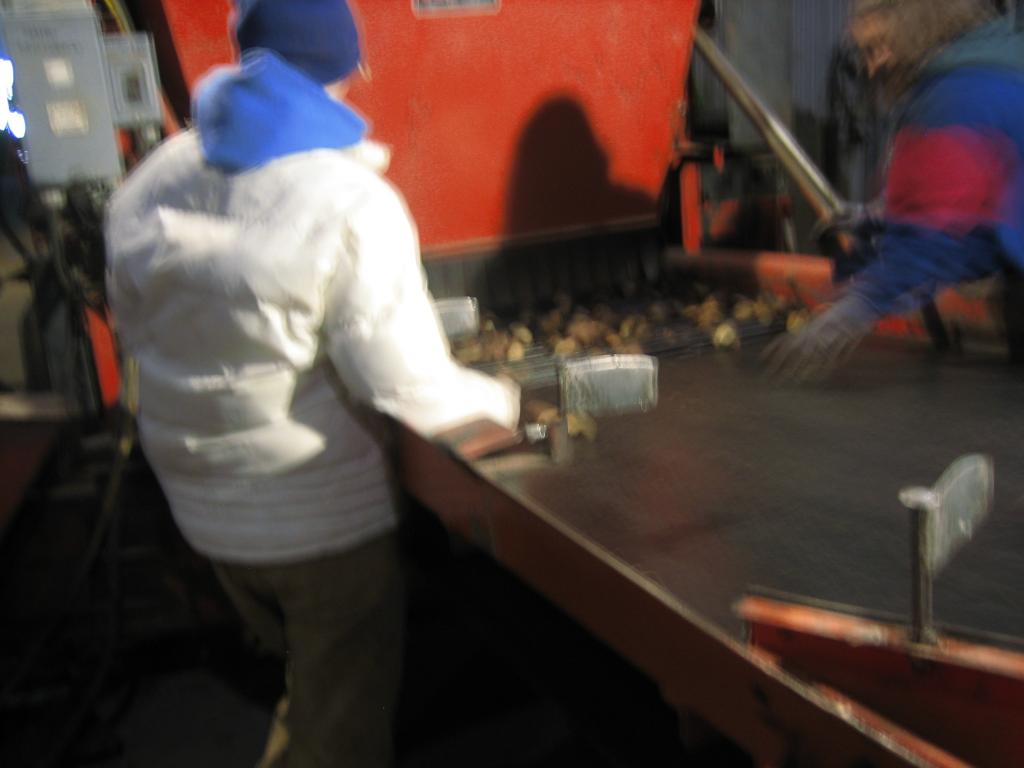 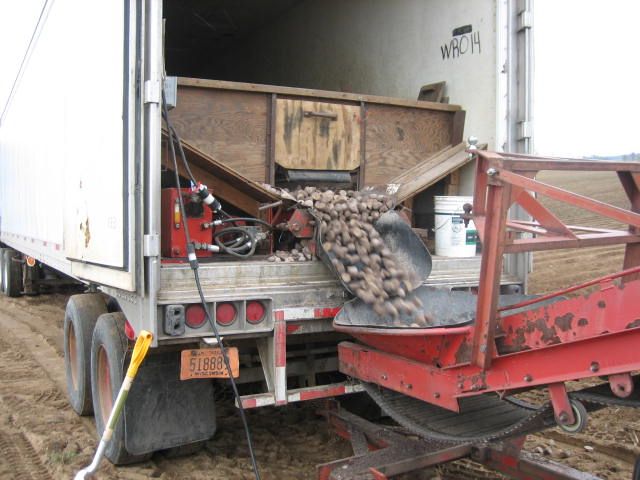 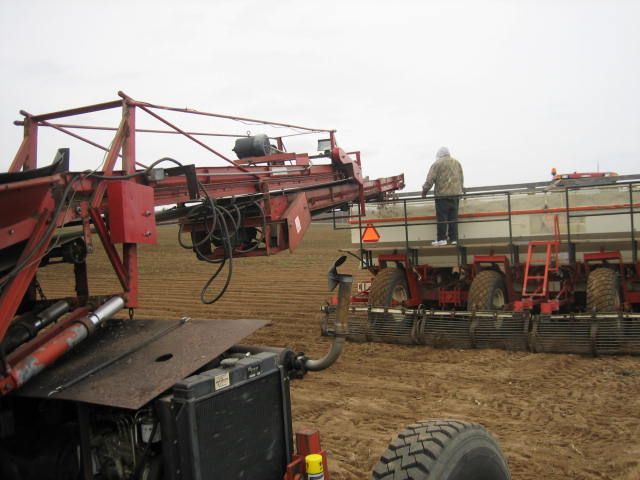 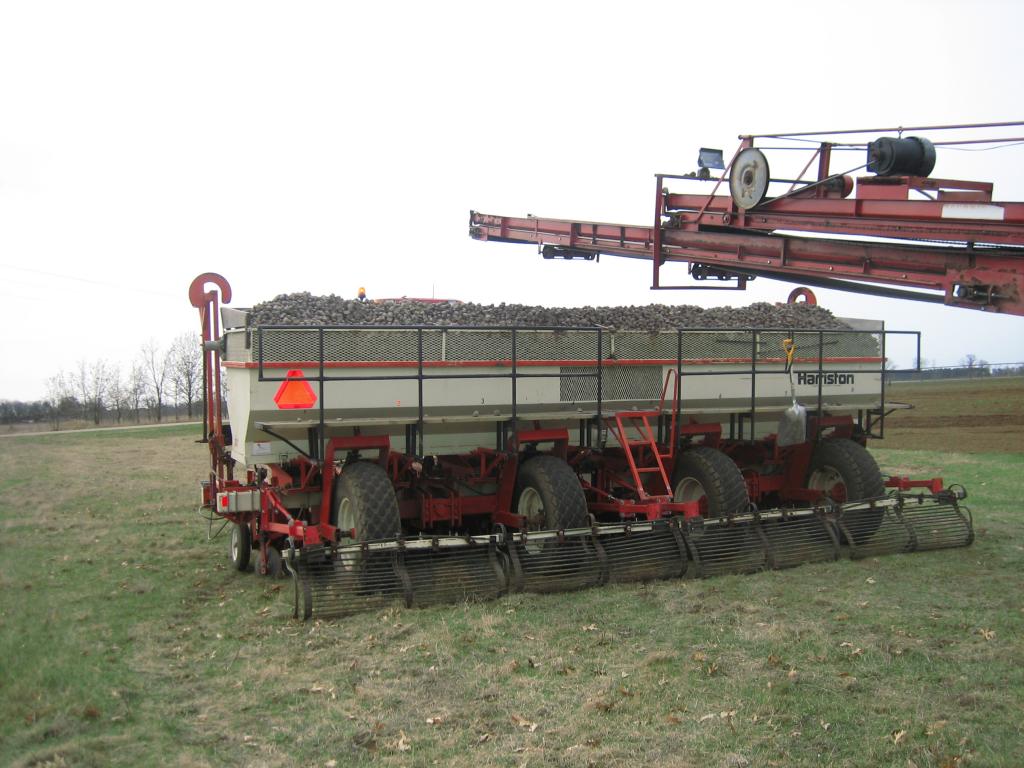 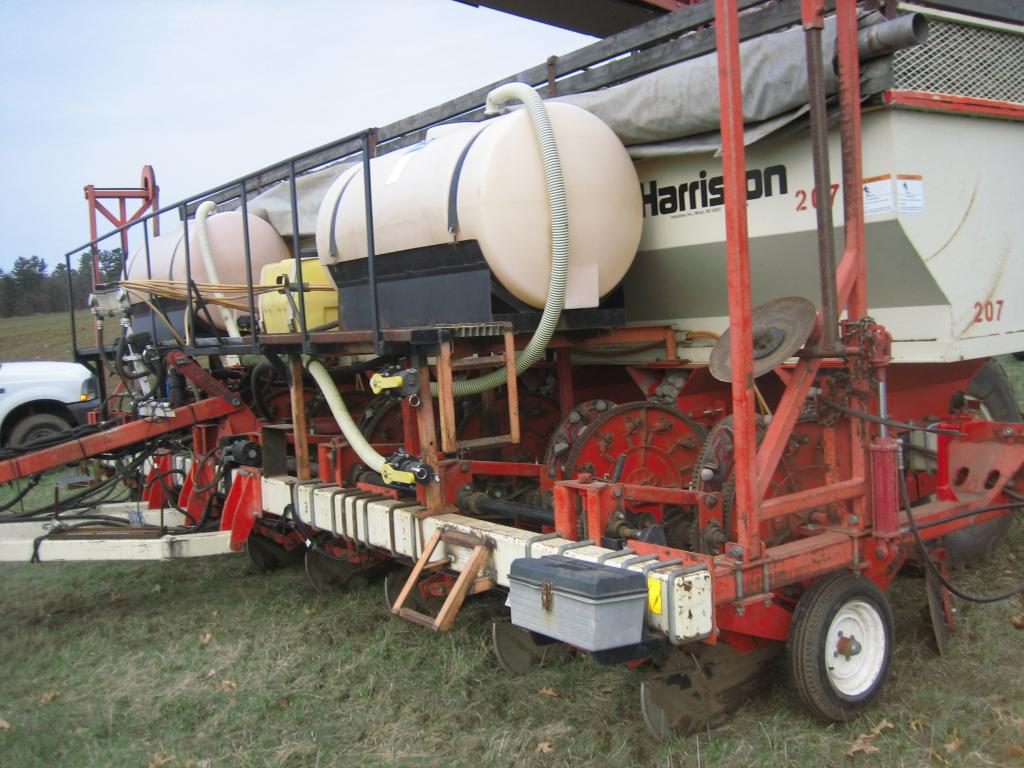 Here is a close up of the seed disk. The disk rotates in the hopper with spikes picking up a seed piece. the disk then further rotates and the seed piece is knocked of the pick into the furrow. This a Harrison pick planter. I used a UnderHaug (Norweigan) cup planter. Same concept except there is cups mounted on a belt which drop the seed into the furrow. Lockwood also makes a vacuum planter planter. Looks like a pick planter except it non invasively picks up the seed pieces. 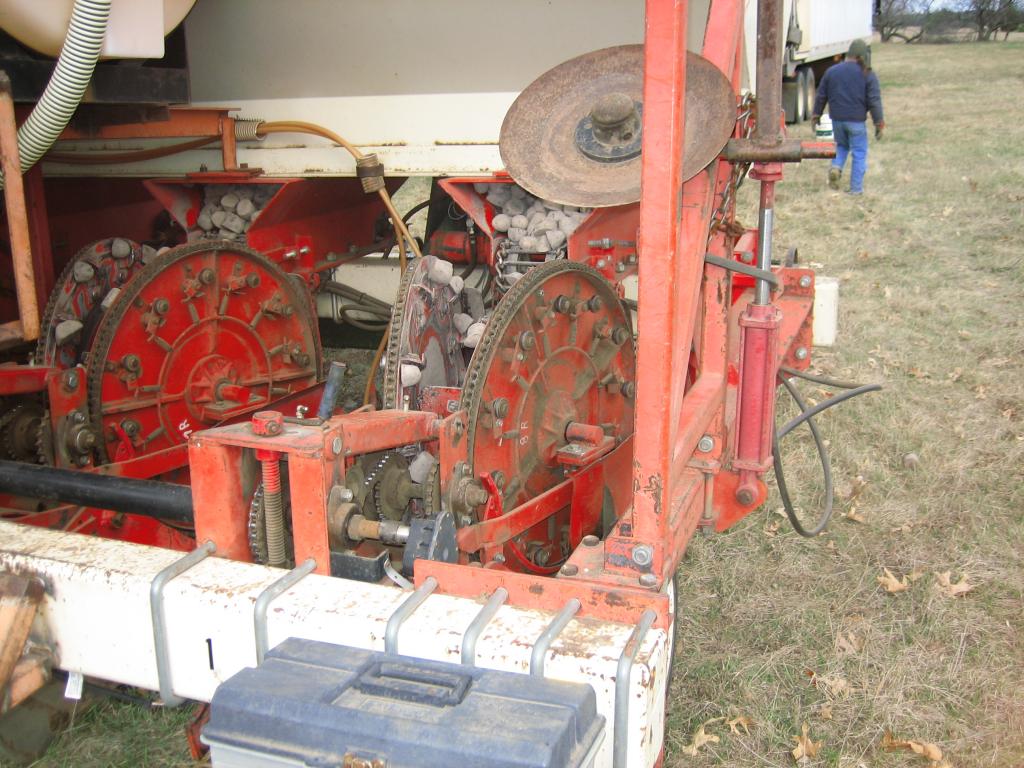 Now for some pictures of of an irrigation system. I currently am waking up they systems form a long winter and preparing them for work. Picture one shows a pivot point with an associated well panel and pump. The systems all move via 3 phase 480 volt power. The well ,75 HP, is driven by the same. Care must be taken as last I checked electricity and water are a avenue for some excitement!!!
Anyway a system such as pictured will irrigated 140/150 acres with 0.25" of water/ acre delivered per 24 hours. That is about the evaporation/transpiration rate per day of full foliage potatoes or field corn. Zaphod is therefore busy during the "dog days" of summer!!! The pumps churn out water at a rate of 1,000 gallons per minute at 55 PSI. Well diameter is 10" with a depth varying from 60 feet to 250 feet depending on how deep we needed to drill for good structure. That good structure was left to Zaphod by the last glacier 10,000 years ago. My farm is located directly at the terminal moraine of the glacier. Also I am located DIRECTLY above the continental divide. 1/2 of the ground water flows to the St Lawrence seaway and the other 1/2 to the Mississippi River. If you look around your home golf course chances are you will find a very similar high capacity well used for the courses irrigation system. Also municipal wells are similar.


The next picture is of the control panel for the irrigation system. Since the system is 3 phased powered I can control the direction and the speed of the water application. Generally a systen run at 100% will apply 0.15" of water with with a 33% rate taking 33 hours and applying 0.45" of water. I can control the speed by the computerized panel varying the application rate within the full 360* of the circle therefore accounting for split field crops and soil types.

The final picture is an over view of the whole system. Note the angle the system takes at the periphery of the field. Most systems are straight and water in a circular pattern. Since land is bought in squares it is advantageous to add a corner arm to the system to irrigate about 15 more acres out of an 160 acre square. Total irrigated area of 145 acres. The corner units are steerable (either by GPS or buy a radio frequency emitting buried wire). The unit will steer out at the corners of the square and "tuck" behind the last towers at the compass points of the field. At the end of the system is a "gun type " sprinkler with a booster pump. The water pattern is extended by 125" giving us more watered acres. This gun is automatically turned on and off by the CAMS (computer panel) as the CAMS unit senses the system is in the right reprogrammed position.

That's it for now----I will continue to post farm events if Shottalkers so desire. 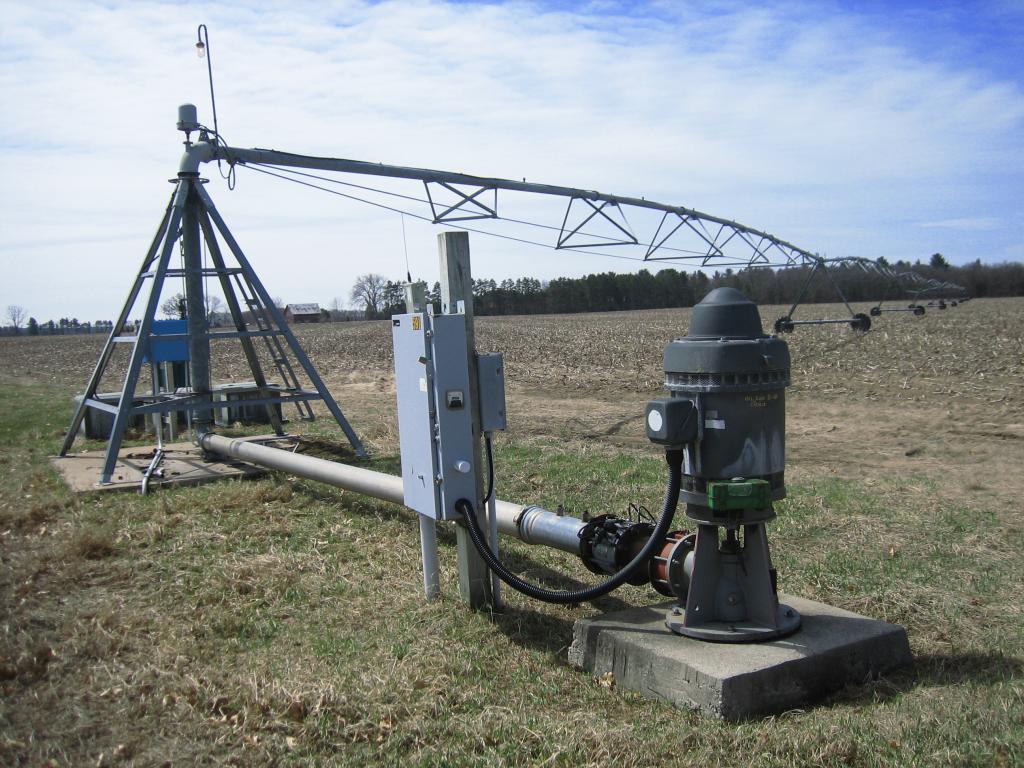 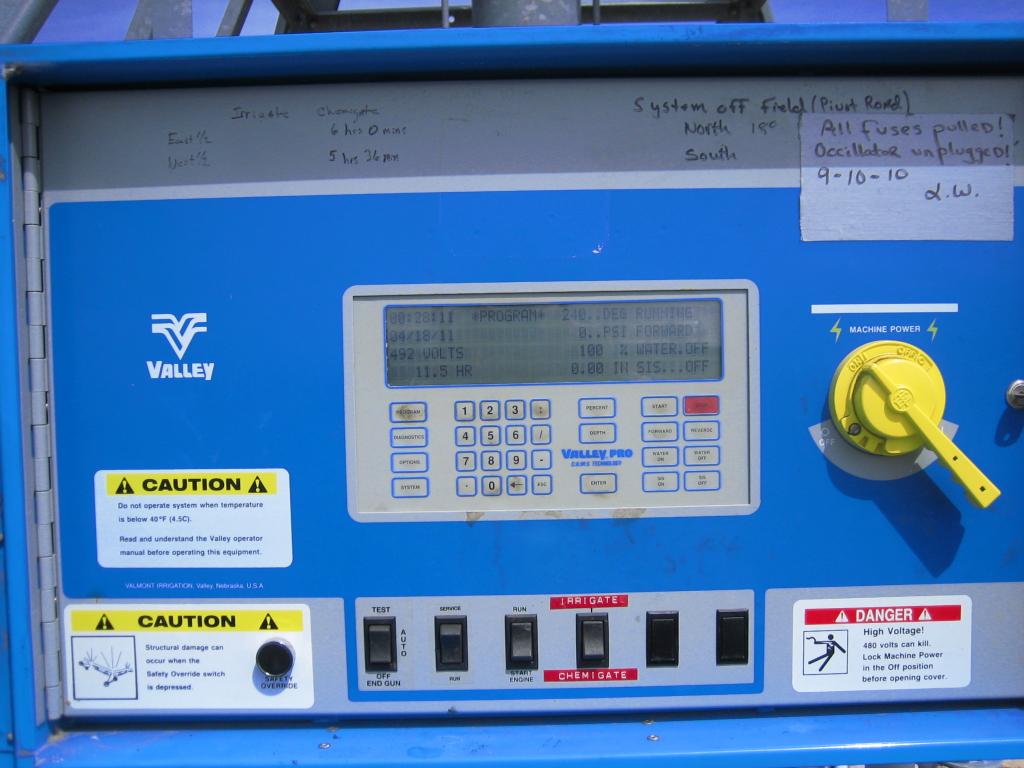 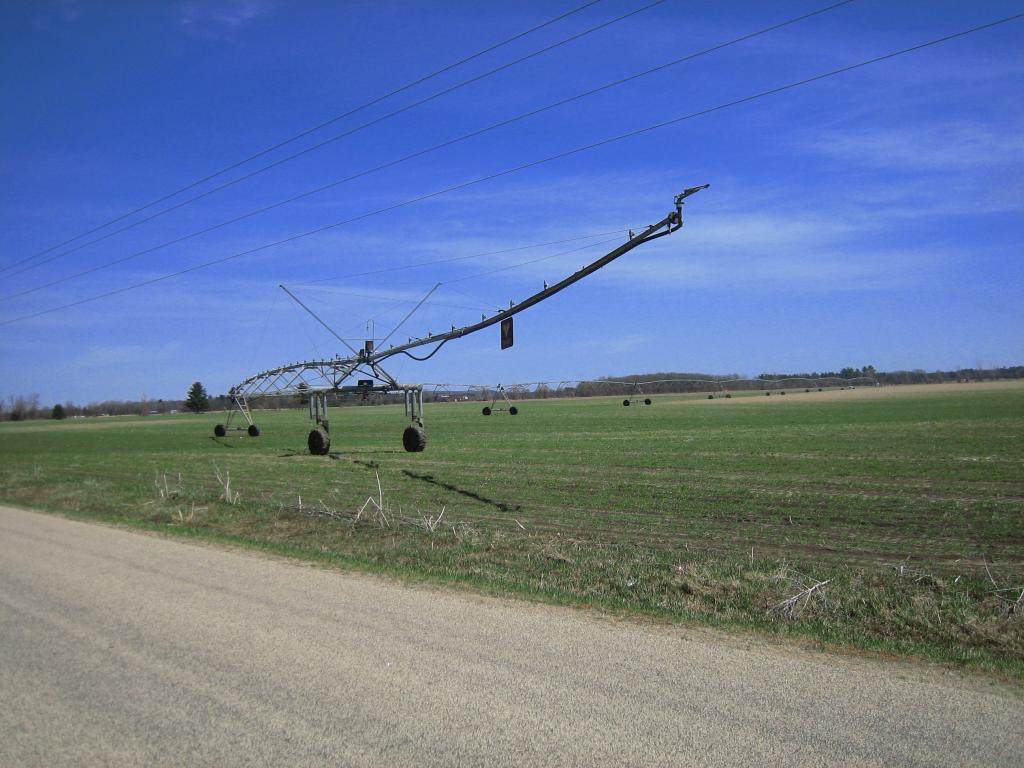 I don't care who you are, it's cool seeing this sort of shit.

Love it Zap, thanks for the efforts. Keep us posted over the summer if you have time!

Wait until you see what zaphod uses to harvest the potatoes!! Awesome stuff. And the building he's got to store them.

Pretty neat stuff, i've been on dairy farms, beef farms, as well as crop farms, but none of them ever did potatoes. Always corn/soybeans...

Very cool stuff Zaphod! Potato harvesting is what i'm interested in... I've seen sugar beet harvesters, is it anything like that? It always amazed me how we can make machines that will pick some very delicate fruit/vegetables and do it at a rate no human could ever match. Tomatoes for example...i know people that can't pull them off the vine with their hands without smashing them...yet we can make steel do it.(of course, the machine harvested ones have been bred to have tougher skin...but still)

The pickers are about the size of my house on wheels. And one of them (?) has a section where they are fed over air blowing up and the heavy rocks will drop out and the potatoes keep going on their way.

Very cool, zaphod! Post more when you get a chance!
OP

Potato harvesters and windrowers are similar to sugar beat harvesters---Same concept---separate tons of dirt from tons of food.

I've been busy getting our corn planters ready. We are the beta testers for the new GPS driven guidance system on the planters. It's been a struggle getting the hydraulic and electronics to play well with each other.

As soon as I get things operating smoothly I will make some time to take and post more pictures. It's been cool and rainy lately so I must be ready when the sun shines!

All is not work as I have had time for perhaps 8 rounds of golf this spring including a quick 9 holes with some single length irons I put together. That will be another post as I solidify my opinion of same. Hogan Edge CFT with Nike slingshot shafts. Made to the 5 iron length and lie and pitching wedge Swing weight.

Cheers gentlemen.
You must log in or register to reply here.