President Obama to get golf lesson from Butch Harmon 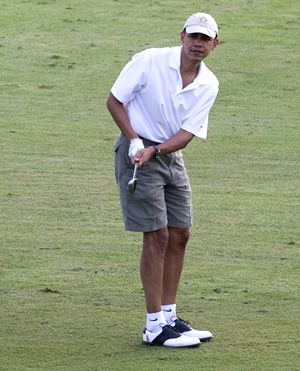 ​
Now that he's delivered his State of the Union address, President Barack Obama is now looking to improve the state of his golf swing.

According to GolfWorld's Tim Rosaforte, Obama will get a golf lesson from Butch Harmon and his son Claude Harmon III this weekend in Palm City, Fla.


The President's golfing weekend at The Floridian GC in Palm City, Fla., will include more than golf on a Tom Fazio course or an afternoon of ball beating at the Harmon School of Golf on campus. The Harmons, Butch and son Claude III, are flying in to work with President Obama, who inquired through an aide if they would be on property during his stay.

"I've played golf with Ike, Nixon, Ford and President Bush 41," Harmon said from his golf school in Henderson, Nev. "I never played with President Clinton. I met him in the Oval Office. It'll be interesting. I know the President is a real keen golfer. I'm looking forward to it. It should be fun."
​
Obama has become a passionate golfer, playing more than 100 rounds since taking office in 2008. He took a break from the game during his re-election campaign, but this visit to see the Harmons indicates that the president intends to play more in 2013.

Source: President Obama to get golf lesson from Butch Harmon

Yeah Barack, this country could use a president that is a scratch golfer.
You must log in or register to reply here.

President Obama to play golf with Tiger Woods in Florida