President Obama to play golf with Tiger Woods in Florida 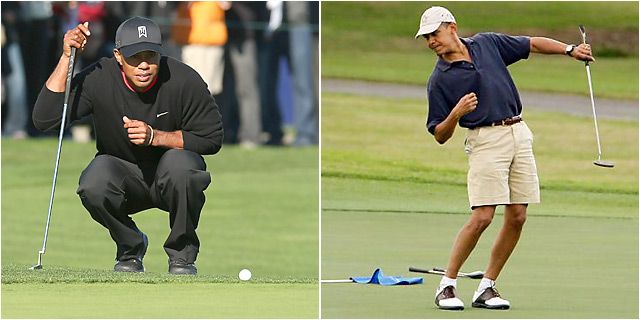 ​
Talk about the ultimate buddies trip!

President Obama is finishing his golf vacation to Florida this Presidents Day weekend with a round of golf with Tiger Woods, according to Golf World senior writer Tim Rosaforte.


The President is arriving at The Floridian range. Awaiting is Tiger Woods and club owner Jim Crane. Historic day in golf. Their first round.

— Tim Rosaforte (@TimRosaforte) February 17, 2013​
Obama has never before played with Woods, who gave a speech in support of the military during Obama inauguration celebrations in 2009.A passionate golfer, Obama is on a boys' weekend in Florida with friends, staying at a hotel in Port St. Lucie and playing golf at the Floridian, a private course owned by businessman and Houston Astros owner Jim Crane. In addition to playing with Woods, Obama also got a golf lesson from Woods's former swing coach Butch Harmon, and played some holes with Harmon.

According to the Associated Press, Obama played golf on Saturday with Eric Whitaker, a friend from Chicago, and White House trip director Marvin Nicholson, a regular in Obama's foursomes at the golf course at Andrews Joint Air Base in Maryland. Obama also played Saturday with Ron Kirk, the outgoing U.S. trade representative, and Houston businessman Tony Chase.

Obama has embraced golf since becoming president, playing more than 100 rounds since taking office in 2009. He took a break from the game during his re-election campaign, but this Florida vacation might indicate that the president intends to play more in 2013.

Source: President Obama to play golf with Tiger Woods in Florida
You must log in or register to reply here.

President Obama to get golf lesson from Butch Harmon

A Spoonful of Tiger Hype