I guess, since spring and summer are coming, it is a good time to start up another good grilling thread.

You dudes were amazing last year, and taught me so much, and your pictures were fantastic of your great food, great grills, and great lessons. Last year was my first year learning how to grill, so I am looking forward to this year so much.

When I get some pictures or stuff, I will post, as well...

Definatly will get in on this! Love to grill, have been doing it since i was old enough to see over the side!

The weather is just starting to get better here in New Jersey. Within the next few weeks I'll be making ribs and brisket on the smoker I bought my dad for christmas. Can't wait.

Yeah, although we are having a late running winter and it is still only about 35* out right now with intermittent chances of rain, snow and God knows what, it is supposed to start warming up later next week. With the golf season starting up, it is definitely starting to be about that time of the year. Although I am doing BBQ ribs and hot wings for the KU game tomorrow and this weekend, because of the weather and the time of the game, it will likely just be part on the grill if it is not to bad, and part on the slow cooker with my home made sauce this time of the year. Maybe get some pictures none the less. I imagine I will be getting the smoker ready for action in the next few weeks.

For those who were not here last year, this is the one that Spank started up last year, which will likely give you something to make you mouth water if it is still just warming up in your area. Actually what I would consider one of the all time classic threads on here IMO.

I got a question guys...Tonight I decided to make grilled pizza. I have pocketless pitas as well as tortillas. I have chicken breast, spinach, onions, mushrooms, and a plethora of dressings and marinades. Any ideas on a marinade or sauce to go with the pizza?

Tonight was the first time this year, other than steaks a few weeks ago, that we used the grill. After rereading last year's BBQ thread and saw the Pita/Tortilla Pizzas I decided to try it. I used Chicken, Boston Lettuce, Cherry Tomatoes, Vidalia Onion dressing, and orange Poppyseed dressing.
First I cut the chicken, 2 medium sized breasts, into strips and put them into a marinading bowl with:

I tossed all that together with my hands and let it sit for about 10 minutes while I let the Grill heat up. After the grill was up to heat, I poured some Canola Oil onto the grate of the grill, and brushed the grate clean with the brush. Than I grilled the chicken. After the chicken was done I grilled the Pocket less Pita that I basted in Olive Oil before I grilled it. Than with the Boston Lettuce, Cherry Tomatoes, chicken, and Orange Poppyseed Dressing I tossed all that together. Than back on the grill, I assembled the chicken/salad mixture onto the pita and threw some Mozzarella on top of the Pizza and let it melt.

Than I ate it. One damn good pizza. I even took a picture. 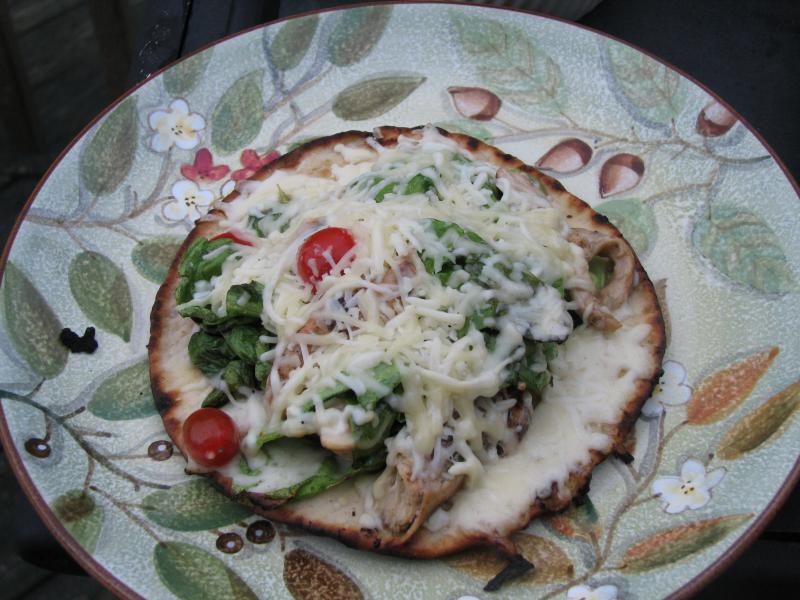 Well my wife is out of town for a few days so I can eat like man for a change. No freaking chicken breasts or salmon tonight. Tonight its the real McCoy STEAK. A nice aged rib steak (basically a rib eye with the bone and surrounding meat still attached), seasoned with garlic and pepper, then grilled to perfection at 3 minutes per side and then brushed with melted garlic butter. Damn was it good.

Heres the star of the show, followed by his guests. 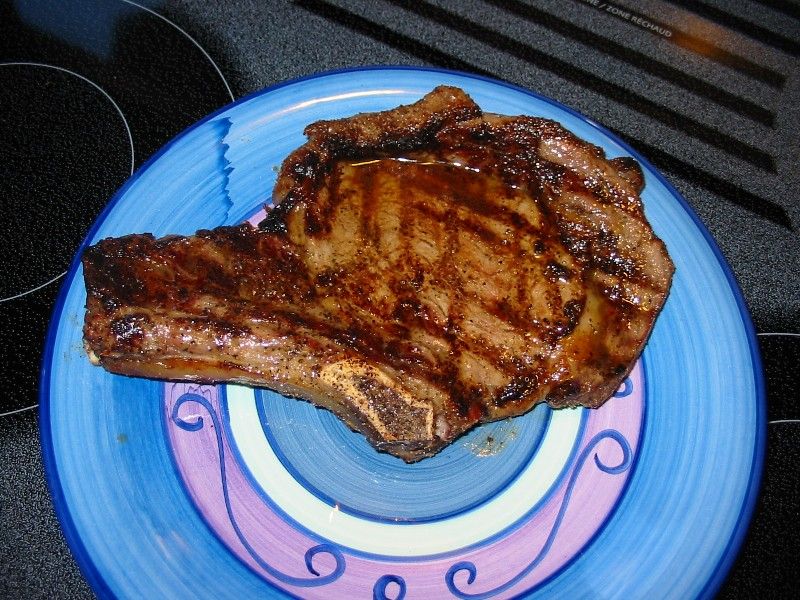 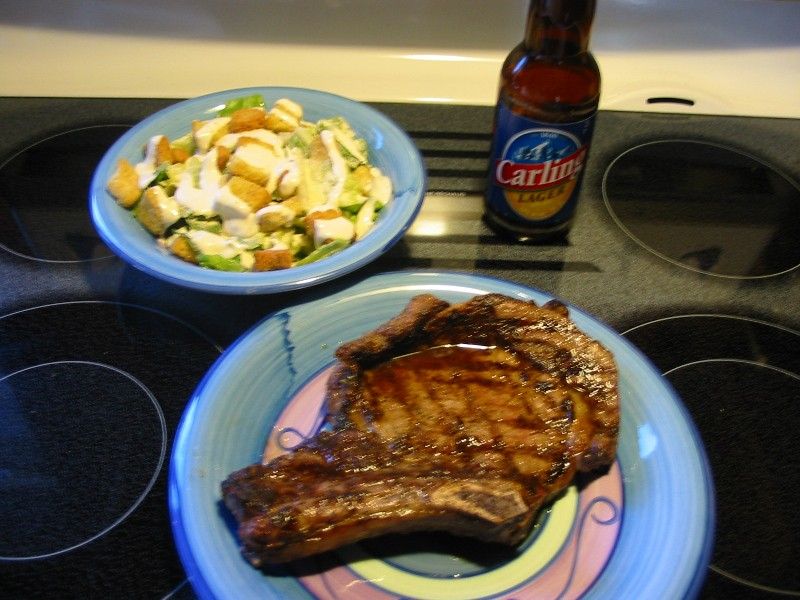 You want shipping insurance on it?

Umm if it is still steaming...than no thanks. I wonder how many Kuricks that poo will be though?

LyleG said:
Well my wife is out of town for a few days so I can eat like man for a change. No freaking chicken breasts or salmon tonight. Tonight its the real McCoy STEAK. A nice aged rib steak (basically a rib eye with the bone and surrounding meat still attached), seasoned with garlic and pepper, then grilled to perfection at 3 minutes per side and then brushed with melted garlic butter. Damn was it good.

Heres the star of the show, followed by his guests.
Click to expand...

What's that green shit in the bowl? Did you feed that to the cow first?

lilhellmaker17 said:
Than I ate it. One damn good pizza. I even took a picture.
Click to expand...

The key to pizza on the grill is using indirect head. That way, you'll get all your cheeze to melt.

Try warming up the Q and then turn one burner off about 5 minutes before throwing the pizza on. You'll still get those awesome grill marks and all the flavour, and it will cook more evenly.

I've cooked so many pizzas on the BBQ, it's not even funny. I once had one completely cooked dropped it on the patio. I GUARANTEE the neighbours 10 houses down heard me curse. :laugh:

Well lets just say you would have been happy if my pizza was your pizza anbd it fell. Everything was good but lets just say the crust was a little well done...

I couldn't turn the grill off because...1) I don't know how..our grill is old. 2) my mom was cooking other chicken breast where my pizza was.

Rockford35 said:
What's that green shit in the bowl? Did you feed that to the cow first?

You must be referring to my ever so tasty 80% cruton salad. Hardly had room for the damn lettuce.
L

How do you do brisket on the grill? That sounds good...


I've always said if you can grill it, I can make it, as a joke and often then said I'm going to figure out how to grill lasagna.


Last year we had a major power outage in July, after a big storm. It lasted for a week. I learned to make coffee on the Q. After a couple days, I was making about anything I could think of, except brisket and lasagna
You must log in or register to reply here.

R
anyone buy a grill lately?
2

Superbowl - What are your thoughts?
2

You favourite place in the world to visit
2