Rumour has it DJ has applied to play on the DP World Tour, now that he’s been suspended... the circus will continue

“According to multiple reports during the second round of the LIV Golf Invitational London event at Centurion Club today, Patrick Reed, Rickie Fowler, Matt Wolff, Pat Perez, Bubba Watson and Jason Kokrak are on the cusp of adding their names to the growing list.”

Time for me to chime in. I watched some of this on YouTube over the weekend, but not a lot, and it was OK, but I was not overwhelmed. I did watch Rory win the Canadian Open which was fantastic, the atmosphere, the contest was epic.

The LIV event in London, felt like a tier 2 Korn Ferry event. Tickets were given out free to attract crowds, they had some sort of off-course entertainment. The players were all smiles and high-fives. They reduced it to 54 holes with a new team format as well. But it started slow, for sure. That was always going to be the case. I think it will be 12 months before we can gauge the success/failure of this new tour.

Do I agree with this? I'm on the fence, to be honest. I like the fact that players should be allowed to be free agents and should be able to play where they want in the world. They should not be tied to one tour and subject to their rules. Ian Poulter made the point that for the last 25 years he has played all over the world, in Australia, Africa, the United States, South America, Europe etc. To play in events, he needed permission from the PGA to play. It seems in this case, the PGA feels threatened enough to suspend players for playing on a competing tour.

People are getting upset about LIV's source of money. It's a difficult one to be honest, as lots of people have made boatloads of money, sourced from unscrupulous sources, without batting an eyelid. Lots of sports events are backed by "dirty money", it isn't hard to find. This has happened in golf before. Remember the Gary Player-backed Sun City Classic in South Africa in the 1980s? Pros were lambasted for playing in a country where there were apartheid / political issues. Here's an interesting quote from 1989.

“With only 10 players and a chance to win this kind of money, I’d be foolish not to come. I mean, this is a lot of cash,” said Green, who finished second in last year’s Million Dollar. Besides, he added, “I don’t think sports and politics should be combined.”
Ken Green, 1989

Golf moved on, as did most of the players and fans.

Professional golfers play golf for money. Same as any athlete for any sport. That's why they are professional. I think it is wrong to question individual moral characters for their choices. We all have our own life to live.

I think the PGA is doing what any company under threat would do, they will protect what they have at all costs. But it looks like BDC, Bubba, Wolfe, Reed, and perhaps Fowler are also going to make the jump. The fields will get stronger, more golfers will jump, it is inevitable. Let's not kid ourselves, there are a bunch of guys sitting on the fence watching this. Charles Schwartzel won £4m for 54 holes of golf (individual and team). I would imagine there will be queues of golfers lining up for a slice of this action.

My guess is that they will run out of money at some point. They need to attract other sponsors to build momentum. Or it will be dead on its feet. Will these guys be allowed to play in Majors? Who knows. But in 12 months' time the "storm in a teacup" will have moved on. One way or the other.

ualtim said:
Everyone is getting all over the players for taking the cash grab, but I still do not see the outrage thrown at the course owners, corporations, politicians, and countries who also have a hand in the same cookie jar.
Click to expand...

Exactly this. The company that owns Pumpkin Ridge absolutely screwed over their own members. Just garbage people selling their souls. Having said that, I'm still disgusted by the players taking the money.
OP

IrishGolfer said:
I did watch Rory win the Canadian Open which was fantastic, the atmosphere, the contest was epic.
Click to expand...

"This is a day I’ll remember for a long, long time. The 21st PGA Tour win – one more than someone else – that gave me a bit of extra incentive today. I’m happy to get it done."

One more win than Greg Norman

A lot of talking heads believe the Masters holds the key as far as if LIV will succeed. A lot of folks want the Masters to ban LIV players. I am guessing the Masters does not change a thing.

Masters membership is a fairly well protected membership list, but there are a lot of well known/famous members that are known as current Augusta Members. Some of them have known relationships with the Saudis and I am guessing a good chunk of the unknown members do as well. If they ban LIV players for taking Saudi money, they will be opening themselves up to a lot of negative publicity and scrutiny from the press etc. Not that the Augusta members are above the obvious hypocrisy, but I think they do not want too many folks poking around their business dealings and making them public.

“With the 2022 US Open just around the corner, speculation is rife that more players from the PGA Tour will walk across to join the ranks of LIV Golf, the name powering the newest and richest professional golf tournaments in the world.

Reports circulating around the grounds of the US Open seem to point at young guns Viktor Hovland of Norway and American Harold Varner III jumping ship.

One source reports that there could be “an avalanche” of PGA Tour players joining LIV Golf soon after the US Open.”

Saw this today. Looks like LIV is starting to attract some younger talent. With the DP World Tour not banning LIV players, yet, looks like their ranks could swell with the LIV tour members (DJ) looking to join that Tour.

“Whether we all like it or not, in February 30 guys played for the same promoter in Saudi Arabia with an acceptable release from the PGA TOUR, and for years the DP World Tour has had an event there, same promoter,” he said. “We also had to ask the question, if you’re going to put that kind of clause in, who gets in, we’ve got to go back to 9,300 people and played last week but who played ever, where, sponsored by. It becomes a pretty slippery slope to try to apply that across 9,300 people.”

USGA’s response to why LIV players were not banned.

ualtim said:
“Whether we all like it or not, in February 30 guys played for the same promoter in Saudi Arabia with an acceptable release from the PGA TOUR, and for years the DP World Tour has had an event there, same promoter,” he said. “We also had to ask the question, if you’re going to put that kind of clause in, who gets in, we’ve got to go back to 9,300 people and played last week but who played ever, where, sponsored by. It becomes a pretty slippery slope to try to apply that across 9,300 people.”

USGA’s response to why LIV players were not banned.
Click to expand...

The USGA is so awful.
N

I did like watching it. Liked seeing players that have never seen before , and they played well.
Will watch again
OP

LIV players in the US Open and their current positions: 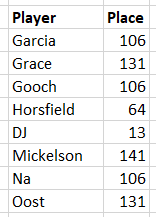 I say more power to the players who are trying to make more money in their profession. Don't we all do that on a daily basis? In our lives, don't we all use every tool, every option we have to get an advantage in life? Buy new clubs. Take lessons. Specialized training to increase our paycheck. We want our kids to go to college so they have an advantage. Etc, etc...

PGA does not stand for Political Golf Association. This banning just shows they have too much power and they're a bunch of pusses. Would love to see them completely restructured relative to how they control players.

I applaud the USGA.

Is it "dirty money"? Probably. Were The Masters purses "dirty money" when they were all white and all male, and did you get mad at the players who played it? Might not be the best example, but I think you get the point.

Would my preference be that this tour didn't exist due to some issues? Sure. But it does. If some guys decide to cash in and play it, good for them. Will I follow it closely? Probably not because I don't think it will last.

And no, I'm not looking for a political debate on any of these issues (no politics). It's a tough topic for sure.

It would be interesting to see if any of the money for the Masters came from the dudes that did 9/11
You must log in or register to reply here.

A Quandry of Sorts...