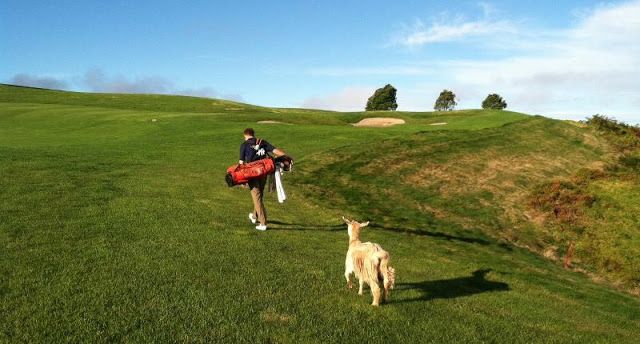 ​
Tiger the Goat is a valuable member of the staff at Kauri Cliffs Golf Club. (Mandarin Media)​

KERIKERI, NZ -- IN A LAND BETTER KNOWN for its sheep, on a golf course better known for its lofty world ranking and 5-star accommodations, Tiger the Goat has impressed staff and guests of Kauri Cliffs Golf Club with her outgoing personality, cart-driving prowess and social media skills.

"It's important that we don't overlook Tiger's grazing abilities. That's her bread and butter, and it comes in handy on those steep sections of the course that need trimming," said Ryan Brandeburg, director of golf at Kauri Cliffs GC.

"Of course, Tiger has the run of this entire place. She's welcome in the pro shop and goes out on the course with our staff. I suppose there might be a golf club somewhere that has adopted a goat as mascot. But does that goat have it's own Facebook page? I doubt it."

Tiger has indeed plunged headlong into the social media movement. Brandeburg hastened to point out that Tiger isn't out there, online, for any reasons untoward; her basic Facebook information is most clear -- "In a relationship". Be sure to "like" Tiger and her friends at Kauri Cliffs, as Brandeburg revealed the staff is mulling whether to equip Tiger with a wireless GoatCam this spring. 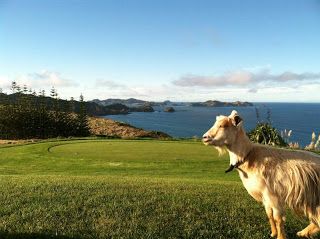 ​
Tiger enjoys her golf habitat. (Mandarin Media)​
Tiger arrived at the prestigious Kauri Cliffs GC (Golf Digest ranks it 19th among all courses located outside the U.S.) in 2011, with no such online ambitions. Brandeburg and his staff were looking to solve a maintenance issue.

"The right side of our range is very difficult to maintain; it's just too steep to mow traditionally," he explained. "There's a natural wetland at the bottom, and with the wind coming off the ocean -- combined with the fact that most golfers slice -- we lose thousands of golf balls over there. We keep penned cattle over there but they tend to break out and wander off. So we acquired Tiger to nibble away at that steep hillside.

"She's done a great job but we've realized we would honestly need 30 goats to tackle that job. We've also learned how expensive it is to keep a goat, even one as hard working and genial as Tiger. She drinks only clean water; we must hand-feed her these pellets to supplement her diet; we have to clean her goat house daily... I don't think we could afford 30 more goats."

Kauri Cliffs GC and its adjoining, award-winning lodge (#16 on Travel+Leisure's Top 100 Hotels list for 2012) both reside on a massive, 2630-hectare property that features all manner of wildlife, including rare birds and herds of sheep and cattle that graze the outlying areas, on course and off. Tiger fits right into this milieu, proving useful to and extraordinarily at ease among the humans.

"She's a frequent guest at our Tuesday evening putting contests and she goes out on the course with the boys, no leash necessary. She never leaves their side," Brandeburg said.

"Goats have a bad reputation for eating anything and everything. But Tiger has never chomped on any turfgrass. If she had, she would never have so endeared herself to our maintenance staff."

Kauri Cliffs and its sister course on NZ's North Island, Cape Kidnappers GC in Hawkes Bay, have both developed worldwide reputations for environmental stewardship -- adoption of a pet goat would seem the latest development and the next logical step in this long eco-narrative.

Cape was the first golf course in New Zealand to gain certification with Audubon International as a designated Audubon Cooperative Sanctuary, and Kauri soon followed suit.

The goat got her name from Robertson, the American investor whose most successful and prolific venture was The Tiger Fund.

While Tiger is neither an endangered species nor indigenous to the Kauri Cliffs property, she is fully ingenious. One picture on the Facebook page shows Tiger behind the wheel of a golf cart.

"I can neither confirm nor deny the fact that Tiger has developed any driving skills," Brandeburg said. "But I will say this: She's a quick study."

That's a cool story, thanks.
You must log in or register to reply here.

Goats Better Than Mowers for University of Michigan Golf Course