I'm looking for a bag that isn't too expensive but will give my clubs protection when I fly. Are the soft sided bags good, protecting against baggage handlers? iv'e been looking at this bag Bag Boy T-350 Travel Golf Bag Black Silver Travel at GlobalGolf.com if not this bag then are there any in that price range which would be good? Thanks.
P

Not sure about the Bag Boy model you mention, but from what I understand soft sided bags are actually better than hard case models. They are also the preferred type for the Professionals. I use a soft side model, but it was a little more expensive and the one you see at the bottom of your link. The Club Glove Burstproof that is listed at $189. (actually mine was the first model, not sure the difference as that one says it is the 2, may want to see what kind of price you can get on the old model)

A couple things to be aware of on soft sided bags. First the airlines many times will make you sign a waiver saying they do not warrant against damage to the clubs inside soft side bags. Although this doesn't concern me because Club Glove knows this and guarantees to cover against anything the airline will not cover as far as damage resulting while using the bag. I would check the Bag Boy, possibly tells on their website, and if they do not have something similar, then realize you risk not getting your clubs fixed if damaged. Where with a hard case they would I believe.

Secondly, it is a good idea to use something in case they drop your clubs on the heads. Club glove sells what is called a "Stiff Arm" that runs about $25, and have seen them at Dicks Sporting Goods Although I took a little cheaper approach and just picked up a Shower curtain rod for about $4 at Walmart and extend it out inside the bag, which seems to serve the same purpose. So if they toss them on the heads, the Shower curtain rod will break the fall and not my driver.

I personally would only use a soft case as it is much more convenient when I get there to not have to deal with the big case, and just fold mine in half inside the plastic corner piece. Also I would be concerned that with the hard case my bag may exceed the 50 pound limit, but maybe they are lighter than I think? I guess if Club Glove did not warrant for damage I may feel differently. I have traveled about 20-30 times and my wife about 30-40 with this bag and have never had a problem with damage, only my wifes clubs being lost 1 time.

Here is the link to the "Stiff Arm" to give you an Idea what I am talking about, but a shower rod words dandy for me.
ClubGlove.com

edit 1 - Whatever you decide on, get wheels on the bag for the sake of your sanity. I couldn't even imagine not having them on a bag.

I would not feel comfortable without using a cast iron protective cover (if I traveled with my clubs). These guys that throw this stuff around don't give a damn about your clubs and I can't see how a soft bag would protect anything.

I also have a Club Glove, and it's designed to foil even the most idiotic baggage handlers. I have the "Stiff Arm" that Jayhawk speaks of, and feel it's absolutely worth it. That and a couple of towels wrapped around the heads, and I don't fear club damage at all. The Club Glove is guranteed for life. It's well-designed, and makes traveling with your clubs a heck of a lot easier. Spend a little extra and get the one the pro's use.

Now the next question is: 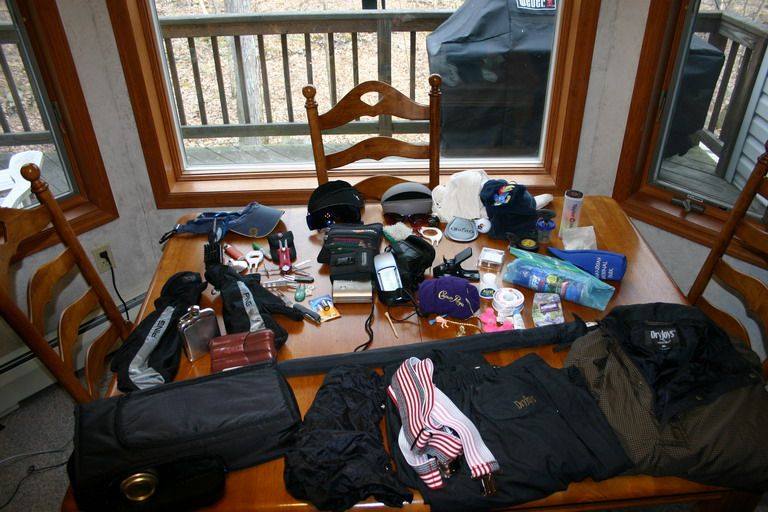 I travel light when I have to haul the $#!+ around. Now you know why I said having wheels on the bag is a must. Plus you figure I put half the stuff in my carry on in fear that they will steal it, and the other half in my other checked bag in fear that if they steal my clubs they only cover $3000, and that stuff adds up quick. So I do manage to get in at around 35 pounds, even though my cart bag while at home may border on 100 pounds.

... and WBL, As far as a soft bag, I think they make more sense. As with the Club glove there is a strap that tightens the heads together, where with a hard case you would need to pack them in something to keep them from banging around. So as long as you have something to handle the impact like the stiff arm, they should be fine if not better. I also kinda like that I now use the iron covers for travel, plus the woods have headcovers. So everything is padded well.

I may pick up a stiff arm next time I am in a golf store, as the curtain rod can be kind of a pain. I really used the shower rod mainly because I could not find the Stiff arm in the store.

I use a hardcase and it works great, I forget which, but I picked it up at Sports Authority. Held up well for my trip to Alabama, and back. Also, I might have been lucky though, because even on the hard case there was no indication of abuse from the loaders. *shrug* Maybe they golfed.

I went with Cargo Golf for a travel bag. Cargo Golf and Golf Guard Golf Travel Cases by Doskosport

You use the bag as your travel bag and your golf bag. It has wheels and a shoulder strap. It is a hard case.

I don't know about you, but when I travel, most of the time I use a cart. This is a much better bag to use for a cart, due to the hardshell, but I have walked 3 rounds with it without a problem.

I went with the 500 which is just too small. All your clubs fit, but it is a BITCH to make them fit with the clubhead covers. Also, your shoes don't fit in the bag. So you have to have your golf shoes in your bag with your clothes. Which sucks for space because I usually only have a smaller travel bag and I want to use that for just clothes. With size 13 footjoys in there, there isn't a lot of room for anything else.

Now Golfsmith is selling the 700 for $110. I would go with the biggest size you can afford.

The best part of these bags is that they ARE your golf bag and take up the same trunkspace as a normal golf bag. My friend travels with his hardcase, but most of the time it won't fit in our rental car's trunk. Then if he takes out his bag, it doubles all the space you need.

The downside is that they are a little clunky to carry on the course. That and it isn't "your bag".

If you take a cart often on trips, and you are diligent about moving EVERYTHING from your normal bag to the CG, and remembering where you put it, then there are no problems with it really. Except the shoes which I'm sure the more expensive models address.
You must log in or register to reply here.

A Guy Walks Into A Golf Shop...(This is Long)