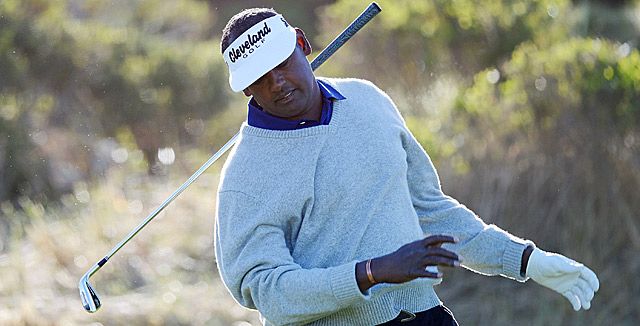 Brandt Snedeker has been the revelation of 2013, but many observers are stunned that Vijay Singh is even playing at all.

An investigative report in the Feb. 4 issue of Sports Illustrated detailed Singh's use of deer antler spray, which contains the banned substance IGF-1 (Insulin-like Growth Factor). Singh admitted to taking it in a statement released Jan. 30 and withdrew from that week's Waste Management Phoenix Open, citing an injured back. Alas, he returned quickly to Pebble Beach last week, where he tied for 50th.

Now what? The Hall of Fame golfer is said to have met with PGA Tour commissioner Tim Finchem at Pebble Beach, and Alex Miceli of Golfweek gives a detailed account of where Singh goes from here. He has several options, including contesting whether he ever really benefited from the spray at all.


Even if the deer-antler spray does contain IGF-1, at least one expert said the banned substance could not enter Singh’s bloodstream and/or metabolize to provide any benefit.

Dr. Roberto Salvatori, a hormone expert at Johns Hopkins Hospital in Baltimore, said oral delivery of IGF-1 by a spray could not be effective and would be digested and destroyed by the enzymes in Singh’s saliva.

“IGF-1 is a rather large protein, and there is really no way it can be absorbed in the body by just applying on the tongue or even ingesting it,” Salvatori said on a recent Sirius/XM broadcast this month. “And the only way that IGF would be present there, could be effective, would be to inject it.”

Singh did not admit to injecting the spray, which was designed to be sprayed into the mouth.

“I believe it's much ado about nothing,” Salvatori said.
​
Even if Salvatori is proven right, Miceli says, Singh could face a suspension and/or fine. That's because his situation has provided a public relations headache for Finchem and the Tour.


If Singh were to be exonerated under the Anti-Doping Program and IGF-1 is not an ingredient of the deer-antler spray, Finchem nonetheless could use his authority to impose a minor sanction and cite "conduct unbecoming a PGA Tour professional."

The public nature of any violation and the negative media coverage could be enough for Finchem to discipline Singh.
​
Source: Vijay Singh still playing despite antler spray admission
You must log in or register to reply here.