Small town next to our course had wind gust to 78 mph last night. Quite a few limbs and twigs on the course. Played pretty well, even though we were fighting sustained winds of 35 to 40 mph. 39/40 for a 79. Three birds!!! If I keep the mental side in order, the game is easier.

I wasn't keeping score this morning. One of the other regulars was and I didn't want to ask. He probably needed a calculator to add them up! Lost 50 cents.... Quitting golf. Taking up pickleball and/or shuffleboard.

No birdies. 38 and 39 for 77. Fixed my yesterday's problem. Overswinging on back nine.

One bird, 38 and 39 for 77. Course had every slow, bad player in Wisconsin on it. Six gruelling hours of waiting.

Had a red fox cross the fairway right in front of me. In Kansas I would expect limp would see something more like a rattlesnake.
Last edited: Jun 3, 2022

warbirdlover said:
One bird, 38 and 39 for 77. Course had every slow, bad player in Wisconsin on it. Six gruelling hours of waiting.

Had a red fox cross the fairway right in front of me. In Kansas I would expect limp would see something more like a rattlesnake.
Click to expand...

A large river runs right past our course. We're not close to any businesses or homes. Hence, we do see quite a bit of wildlife. Every year we have a number of eagles. They are awesome to watch prowl the river and sore so slow. Lots of deer. Coyotes. Coyotes love mulberries. Have a couple mulberry trees and when they are dropping berries, you'll see some coyotes run along #1 and #4. Fox. Beaver. Wild turkeys. Geese. (Hate those nasty geese!) Probably 50 of them that around #14 and the lagoon there. Once the littles ones who hatched a few weeks ago get their feathers, they will leave but be back for next Spring's hatch. Snakes?? Yes, mostly large black snakes and a few bull snakes. Folks say they've see Copperheads. I haven't. Our rattlesnake population is down from what it was when I was growing up here. Over the years, have probably "rescued" at least a half dozen black snakes. If we leave them out in the fairways, someone will kill them with a 9-iron. They eat lots of mice and other pests. I'll grab them by their tails or herd them to the treed areas, hoping they keep out of site and safe. A few soft-shell snappers around the lagoon. Tons of squirrels. Not afraid of anything. We've had problems, over the years, with them raiding crackers, etc., out of carts when a cart is left unattended. Very few rabbits. Think the large population and urbanization of coyotes has hurt the rabbit population.

I enjoy sharing the course with wildlife. Really great that we can coexist in the same close proximities. Of course...

Was visiting with one of my playing partners after the round early this past week. One of the lady golfers pulled up in her cart and hollered at me. She was waving me over to her cart. "Get him out of here!" She was almost screaming and pointing. In the basket behind her cart, a good sized packrat was curled up on a towel just like he was asleep. Dead as a doornail! He looked so peaceful. I picked him up in her towel and dumped him in a trash can. Went to return the towel and she told me not to get it close to her. Was an old towel and it went in the trash with the rat. We have DeCon in the clubhouse available for members to put in their rental cart sheds. Those rascals will do lots of damage to wiring, shoes, club grips, etc.

Here is a common site on Wisconsin courses near water. They like to bury their eggs in the sand traps. They get huge. The shell on this one was over a foot and a half long. 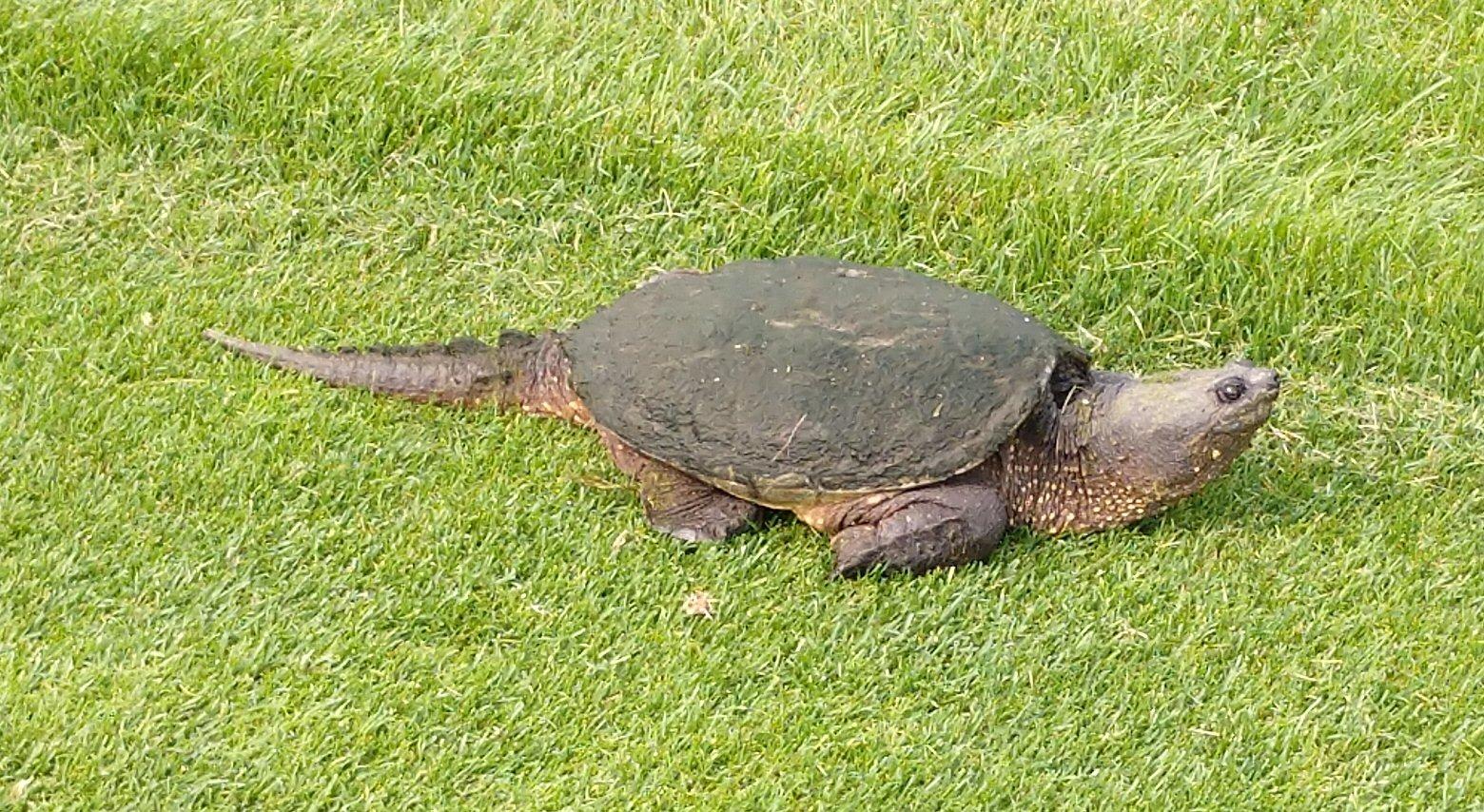 Why are limp and I the only one posting in this thread in a GOLF forum. Doesn't anybody else play?

warbirdlover said:
Why are limp and I the only one posting in this thread in a GOLF forum. Doesn't anybody else play?
Click to expand...

Me? I just post here because I've nothing better to do. Haven't picked up a golf club in five years. Just come on here to lie about what I shot, when I played, and the clubs I buy/own. In fact, I am a programmed robot, fed artificial intelligence by some hacker based in Uganda.

warbirdlover said:
Why are limp and I the only one posting in this thread in a GOLF forum. Doesn't anybody else play?
Click to expand...

A couple of times a year. I am hoping to change that soon.

ualtim said:
A couple of times a year. I am hoping to change that soon.
Click to expand...

Someone thinking about retiring????

limpalong said:
Someone thinking about retiring????
Click to expand...

I think about it every day.

Reality says I at least a decade away, probably longer.

I am just trying to recommit to playing locally for exercise purposes. I bought a nice pushcart in early 2020 with the goal of walking 9 at least a couple times a month. Pandemic hit. Hank Haney Golf Ranch with its 9 hole course down the street closed and never reopened. The other course down the street started offering 9 hole rates post pandemic (used to be same price 9 or 18) so I have been putting a bag together in hopes of getting out there. My last couple sets of days off have not worked due to other commitments or poor weather on my available days.
You must log in or register to reply here.