You're right. Never thought the ball could be the problem. Might be that new Golf Pride grip I'm trying too.

Played good early in the week. Mid 70's. Thought we'd be rained out, yesterday. Two of us went out and the rain didn't develop. Played 18 in 1 hour, 55 minutes!!! Didn't keep score. Only kept par or better marks. ! lost 25 cents when my competitor birdied 18 from about 20 feet.

38 on the front. Disaster (44) on the back for 82. Cold up here in the tundra. There was a young lady playing in front of us. She had a perfect swing and hit the ball farther then I could even think of hitting it. As long as the two big hitters in our foursome. Probably 270ish. Her friend, boyfriend, brother or husband could not even get off the tee.
Last edited: Sep 23, 2022

78. Had to birdie #18 to break even, money wise. Putter has been balky, so didn't have much confidence setting up over a 12' putt. They had double rolled the greens, this morning, and they were rolling like a basketball court floor. Barely touched the ball and watched it act as if it was going to stop an inch or two short. It slowly rolled over the lip and dropped.

We haven't seen our greens this good in a long time. In six weeks, the new superintendent has cured a lot of ills. Still have some heat damage left from the last guy, but that is slowly curing. Deep aerated almost 3 weeks ago. Can't see a mark on the greens. This mowing and double rolling he's been doing on the weekends leaves them scary quick. Pick your line. Blow on the ball. Watch it roll past the hole!!!!

My club championship was yesterday. I was only +1 if you don't count that double or that triple.

The good:
My ball striking was the best it's been in years. I may never have driven the ball that well, I was picking targets and absolutely striping them. Not a single fat/skull shot all day and my distance control was on-point. I was working the ball and executing shots as planned. I had at least 8, maybe 10 legit birdie opportunities (inside 15 feet).

The not so good:
I couldn't BUY a putt. Burned edges, dead-in short, I had NO feel on the green. The double came because I hit a fairway bunker and had to chip out sideways and that was one of my 3-putts. The triple came on the hardest hole on the course. I hit a tree and my ball was lost, and eventually wound up being my other 3-putt.

Finally a fun day!! Even par 72!! One of the geezers ticked me off before we even teed off #1 this morning. Sometimes old me should just shut up. Not in his character to do so.

So, I told myself to take my time and make every stroke count. Three birds. Three bogies. The bogies were short putts I should have made. Hit tons of greens.

Best was my winning $1.50. Guess who had to hand me the quarters? The guy who mouthed off before the round.

Played yesterday and kept up my ball striking. Still had three 3-putts, which is disappointing but 33 putts overall is pretty good for me. 11 FW and 14 GIR makes me very happy!

Played The Reserve (North Course) from the black tees. 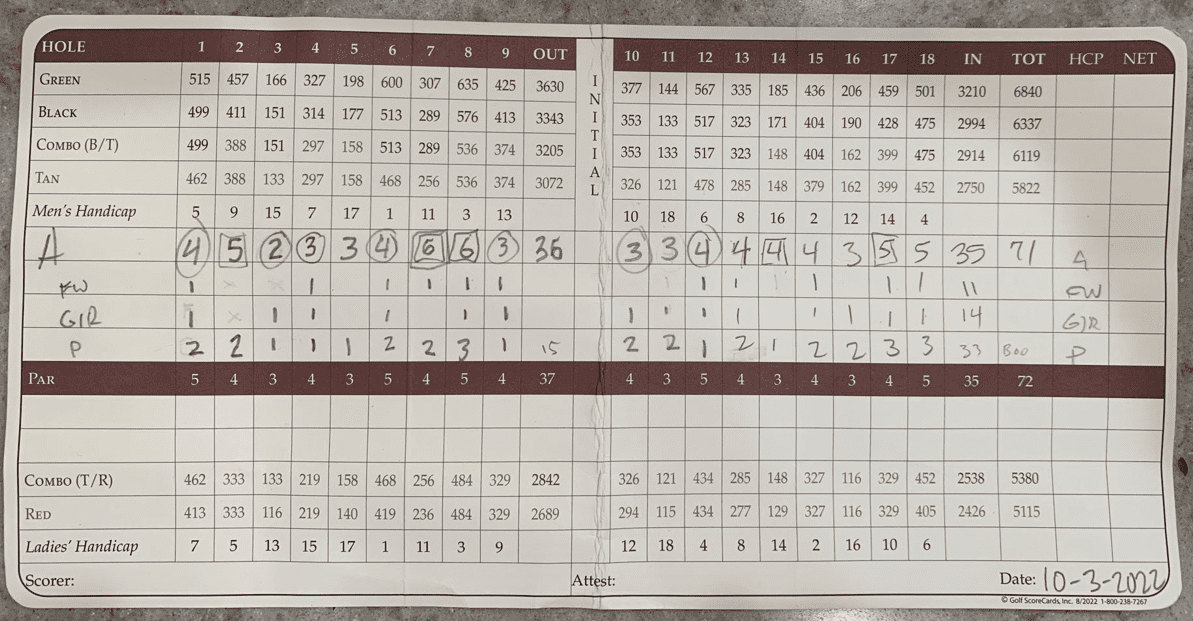